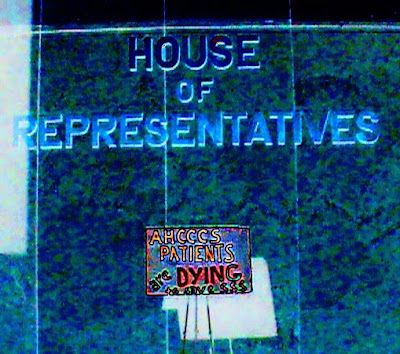 Mary K. Reinhart's been doing an awesome job of covering the effects of Brewercare on citizens with psychiatric disorders in Arizona: Access her archived Arizona Republic articles on this here. These budget and AHCCCS cuts will have consequences that extend to our prison crisis in Arizona, as seriously mentally ill adults continue to be denied treatment and medical coverage and end up diverted from the health care system to criminal justice...

Here's what was lost in mental-health care

It took decades to build Arizona's mental-health system. It took weeks to downsize it.

In March 2010, attorneys for the state and the mentally ill agreed to a two-year stay in the class-action Arnold vs. Sarn lawsuit. The 30-year-old lawsuit was based on a state law requiring a wide range of community services for people diagnosed with a serious mental illness.

Weeks later, state lawmakers eliminated more than $50 million in state funding and most of the services for people with a serious mental illness who were ineligible for Medicaid.

Here's what was lost:

In Maricopa County, about 3,000 people taking brand-name psychotropic medications switched to generic drugs. The most commonly prescribed antipsychotics, including Seroquel, Geodon, Zyprexa and Risperdal, have no generic equivalents.

The generics may not be as effective, tend to be more sedative and have other side effects, such as involuntary tics and tremors, doctors say.

The medication benefit includes a monthly doctor's visit, lab work and a nurse if injections are required.

Everyone receiving state services for a serious mental illness had a case manager, but the budget cuts eliminated that benefit for people without Medicaid.

More than 300 case managers and support staff in Maricopa County, and hundreds more statewide, lost their jobs as the agencies and clinics adjusted to see fewer patients.

The case managers were a lifeline for many of Arizona's most fragile citizens. They helped navigate complex paperwork and provided a sounding board for daily aggravations. They met people upon their release from jail or psychiatric facilities. They tried to head off suicide attempts and psychotic episodes and made hospital visits.

Two case managers remain at each of the county's 18 clinics to make reminder calls and coordinate appointments for non-Medicaid patients.

The budget cuts put 255 people with serious mental illness in danger of losing their housing, which in some cases included 24-hour supervision and had been their home for decades. Most had to move.

DHS officials forbid Magellan Health Services and the other regional administrators from evicting anyone or moving people into shelters, hotels, halfway houses or other transitional housing, as well as unlicensed "board and care" or supervisory care homes.

Dozens moved into apartments or assisted- living facilities, while others moved in with family. Some who have since been hospitalized, jailed or evicted have ended up in shelters and boarding homes.

If there was one benefit she would restore among those lost, Peggy Hoefling says it would be transportation.

Without free bus passes or cab rides, people miss appointments, fail to pick up their prescriptions and may stop going out in public, said Hoefling, a clinical social worker at Connections AZ, a psychiatric urgent-care center. Symptoms typically worsen when people stop taking their medication and isolate themselves, she said.

The heat makes the lack of transportation a particular challenge. Psychiatric medications put patients at increased risk of heat stroke and heat exhaustion.

Thousands of people lost access to group and individual therapy, severing relationships they may have had for decades with counselors, group members and support staff.

Regular group therapy helped people such as Shawn Harris of Peoria better understand and cope with his illness and learn from others who cut or otherwise injure themselves.

This type of cognitive behavioral therapy, which research has shown to benefit self-injurers, helped Harris learn ways to relieve internal pain, cope with stress and anxiety, and express his emotions.

Those without Medicaid also no longer have state-funded job training or access to community drop-in centers, along with the friendships, support and self-esteem that came with them.

Agencies like the Marc Center in Mesa train the seriously mentally ill to take jobs in hospitals and grocery stores or do assembly-line work at the center's warehouse. They learn computer and interview skills, as well as time management and budgeting. The center lost about 120 people to the budget cuts.

Peer-support groups at non-profit centers across the Valley offered outings, life-skills and support groups, and opportunities for social interaction.

Posted by Margaret Jean Plews at 5:10 AM