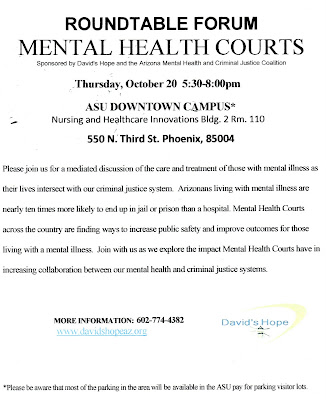 Here's some background on felony mental health courts from a document put out by the folks who pulled together Harris County's Felony Mental Health Court in Texas. Support the creation of such courts in Arizona to address the needs and challenges presented by people with mental illness being charged with felonies, and come on out to the next Roundtable by David's Hope on October 20 at 5:30pm.


"Criminalization of Persons with Mental Illness

A report submitted to the Harris County Commissioners Court on June 19, 2009, by Dr. Barry Mahoney of the Justice Management Institute, noted that in a little over five years, the average daily population of the Harris County Jail (designed for a capacity of 9,434) increased by more than 50 percent. Between January, 2004, and February, 2009, the jail inmate population increased from 7,648 to 11,546. Dr. Mahoney’s report noted, “[a]pproximately 25% of the inmates in the jail (over 2,500) have some type of mental health problem, as indicated by the fact that they are prescribed psychotropic medications. The Harris County Jail is now the largest facility providing mental health services in the State of Texas.” Dr. Mahoney reported that about 90 percent of the inmates with mental illness have previously been in the jail, a reflection of the frequent “recycling” of many of these defendants through the criminal justice system.

Furthermore, Dr. Mahoney also observed that, in recent years, the jail has markedly improved its capacity to house and provide services for mentally ill inmates. He went on to say that there is broad agreement among jail officials, other criminal justice practitioners, and the local mental health treatment community that more must be done to improve treatment for mentally ill or impaired defendants. The report indicated that there is a “strong consensus on the desirability of developing effective alternatives to jail for mentally impaired persons who are arrested (sometimes repeatedly) for low level offenses.”

Dr. Mahoney recommended that the county “consider[s] major expansion of specialty dockets, in light of the high proportion of persons charged with misdemeanor offenses and lower-level felony offenses who have substance abuse, mental illness, or co-occurring disorders.” He emphasized that these dockets should incorporate ‘best practices’ identified through research on the operations of specialty courts and dockets in other jurisdictions.

What is a Mental Health Court?

Mental health courts are problem-solving courts in which criminal defendants with a mental illness participate in a judicially supervised treatment plan developed by mental health
professionals. The defendant meets frequently with the judge, who provides monitoring, guidance, and praise for his progress. If the defendant fails to attend mental health or substance abuse treatment, uses illegal drugs, or fails to comply with other conditions of supervision, the judge will admonish the defendant and may impose sanctions, including jail time. A mental health court is a therapeutic court in which the adversarial process is replaced by a desire on the part of all participants for the defendant to successfully complete the supervision. The ultimate goal is to facilitate the rehabilitation of the defendant, so that he does not return to the criminal justice system."