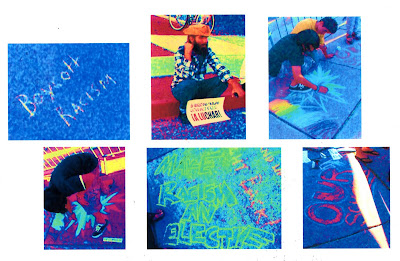 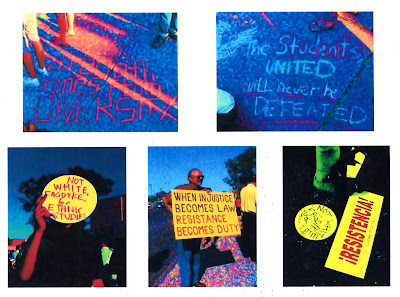 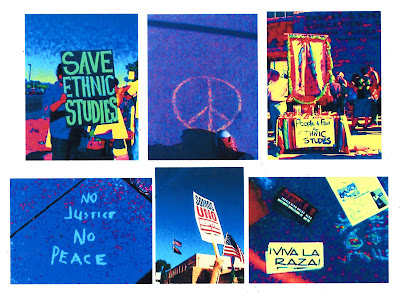 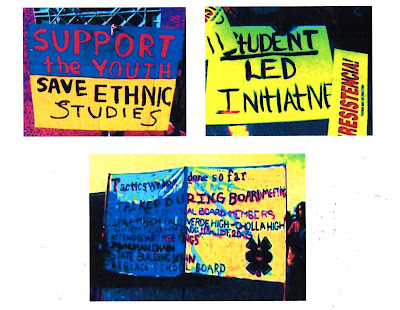 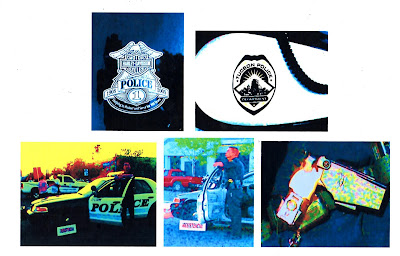 The post is from the Tucson Citizen Three Sonorans Blog, written, I believe, by David Abie Morales.


The photos are mine, from the TUSD HQ protest yesterday afternoon. What an amazing crowd was there - hundreds and hundreds of young people, old people, hippies, queers, Brown Berets (in uniform)...and over 100 cops. 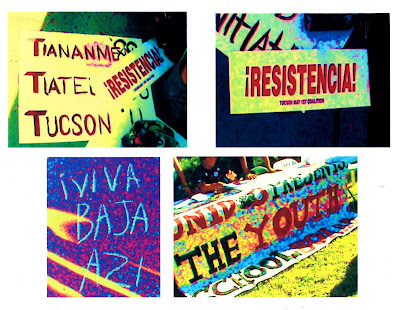 This is a good account of the public highlights...I'm just too exhausted to write my own right now. 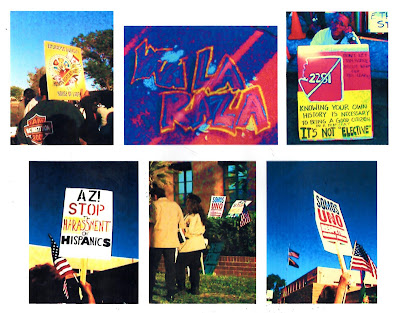 What happened Tuesday at the TUSD meeting?

To begin with, my phone battery died at around 5:30, as the meeting was starting.

No email/text/facebook until now, 8 hours later. 60 text messages and 66 facebook alerts. So to all my friends, no I was not arrested, and yes I’m alright.

I was inside the TUSD board room capturing video and didn’t know what was going on outside until I was debriefed afterwards. Well, I knew a little bit from those around me who still had juice on their phones. In addition, I went through two camcorder batteries.

Why does the Southern Arizona Leadership Council have leaders that compromise on justice and racist attacks on Mexican-Americans in Tucson?

Preliminary thoughts: John Pedicone royally messed up tonight. There was about a hundred cops there, all armed, some in riot gear, and one would think they were at a G8 meeting, not a local school board meeting.

There was cops in the back board room, a wall of cops of about 5 in front of the board, another wall of cops at the back, more cops in the lobby, and more cops outside to get in, and several dozen outside protecting a barricade of the building.


This is what a leader from Oro Valley, where John Pedicone lives, thinks of Tucsonans. All a bunch of thugs and criminals. The cops were not there to protect and serve us the community, they were there to arrest us the community.

There were arrests, there was police brutality, and there were other extreme violations of rights.

All of this I will cover more in depth tomorrow. It is still surreal to me. John Pedicone actually ordered the arrest of Lupe Castillo, one of our most loved professors, elderly and disabled. The cops brought her to the ground. Her crime?

This is an example of how Pedicone and Stegeman do not understand the community. Treating her like they did was like beating up our abuelita, our loved grandmother. 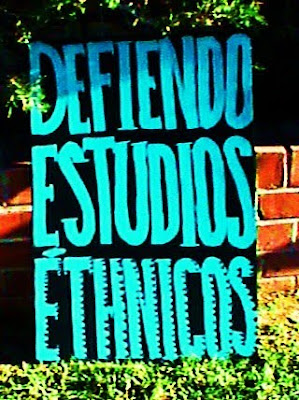 Pedicone crossed the line tonight. Lots of veteranos were there tonight that were involved in the student walkouts in the 1960s. They said this is the worse they have ever seen it, even worse that the civil rights movement of the 60s.

And all of this conflict of Ethnic Studies is created by Mark Stegeman and John Pedicone.

It is a crisis that need not exist, but exists solely through the stubbornness of Mark Stegeman and the racially insensitive (or just flat out racist) leadership of the Vice President of the Southern Arizona Leadership Council. For myself, SALC’s reputation has been forever tarnished, and I want nothing at all to do with anything they do. From urban renewal and destroying La Calle, to destroying Mexican-American Studies today, this is not the kind of “leadership” I want leading us.

I have many thoughts, and I will explore them in more detail tomorrow, but I will leave this with one final thought for tonight.