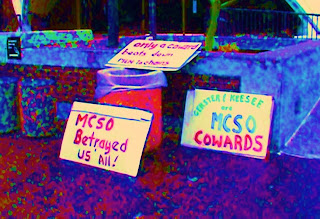 The Comprehensive Trial Management Conference was to be held today (May 18, 2011), but it was pushed back and everything that occurred was done up at the bench, where the public couldn't witness it or determine what was said in the transcripts...I suspect because I had been protesting loudly outside before the hearing, confronting Gerster when he arrived (my taxes paid his salary, after all - and he hurt people in violation of my trust). All I was able to catch Judge Verdin saying to his attorney, who requested that they approach to discuss the case, was that "this is a delicate situation."

Damn straight it is. There are a lot of us mad as hell about what Gerster and fellow officer Alan Keesee did. Gerster and Keesee have more rights as perpetrators of assault than William Hughes has as their victims do now. As some of you may recall, if we, as citizens, are victimized while in custody, we're excluded from the constitutional protections and rights we have when crimes are perpetrated against us in the community, effectively silencing our voice in court proceedings, rights to restitution, etc. if a cop is the perpetrator.

I believe they are buying time for people to forget what Gerster did to us, the rest of his "victims"; chances seem very good that the Maricopa County Attorney is about to offer him a deal. The upcoming trial was cancelled in anticipation of a deal being reached beforehand.

Please contact Bill Montgomery's office and urge that this officer's entire prosecution be made visible and transparent to the public, as he violated us all with the abuse of his office and the assaults on his prisoners.

Remind him that Gerster assaulted at least two "VULNERABLE adults" in custody (making him a repeat, violent offender), and could have been charged with class 2 (not the lower class 6) felonies for that, and must not be allowed to walk with anything less than felony charges and prison time if they give him a deal.

Put your concerns in writing ASAP to:

I'd appreciate copies of your letters to post publicly. Send them to:

Please also express your continued outrage over the conduct of MCSO officers, and your desire to see justice served, to:

Finally, I looked up the status of William Franklin Hughes III's case. The MCAO still appears to be prosecuting him for the petty offenses (like criminal damage and indecent exposure - most likely secondary to the symptoms of his mental illness) that landed him in Gerster's and Keesee's pre-trial "care" in the psychiatric wing of the county jail in the first place...he was even ordered to undergo competency exams by the judge before they would proceed any further. I don't understand why he's going on trial, given what Montgomery had to say recently about the need to divert these folks from prosecution in the first place. I just discovered that his trial was supposed to begin this am, which I missed.

You would think the MCAO would recognize the beatings he received in jail as punishment enough - and poor William was out of his mind when he got pounded on by those guys. So, folks, please also ask Mr. Montgomery what the deal is with William's prosecution. Those are our tax dollars he's eating up in this unnecessary and cruel endeavor to punish a young man who was already terribly traumatized in custody over "crimes" that really hurt no one else... 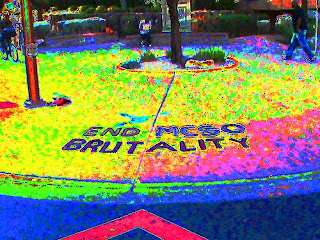 now poor Williams killed a young women... I think he needed to stay there.

The 2017 murder of Lyndi Fisher in LA is indeed terribly tragic - and its not a surprising outcome for William Hughes in tge years that followed the above abuse at the MCSO jails; the MCSO and ex-deputy Gerster did serious damage to him when he was in their care. He was clearly mentally ill at the time he was assaulted by them, and only grew more ill over the years. I doubt he was ever given treatment for PTSD in the aftermath, and wasnt getting adequate psychiatric care when this happened, to be sure. Perhaps had he not been so brutally treated in jail by those responsible for his safety and provided with adequate mental health care throughout his young adult life , this never would have happened. The kid was an is very ill, and the way to prevent such things from happening is not to pre-emptively lock the most vulnerable to psychosis and violence away in cruel hellholes...Its to treat them with compassion and competence,and provide them with safe housing and communities, instead. thats what we all need to be well...that's not to defend or justify Hughes' actions, and my heart goes out to Lyndi Fisher's family; how devastating. There's just no easy resolution, when tragey's like that happen. But it could have as easily been prevented by the right people helping william instead of hurting him even more when they had the chance...