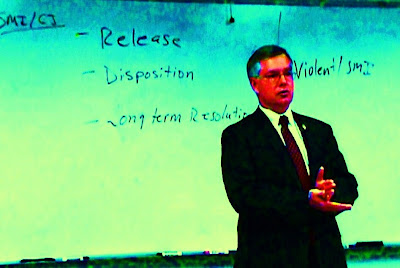 I attended a meeting of the Arizona Mental Health and Criminal Justice Coalition yesterday, where both State Rep. Cecil Ash and Maricopa County Attorney Bill Montgomery participated in our expanding community discussion about the criminalization of the seriously mentally ill. Cecil was true to form - and everyone already knows how much I love that man.


I was ready for a fight with Bill Montgomery, if needed, but was pleasantly surprised. The following letter characterizes his role in the conversation well...

I’ve lapsed into the familiar now, largely because I wanted to leave a hug and my gratitude behind for you at the AZMH & CJ System Coalition meeting yesterday, and it still feels to weird to do that for the man in the Maricopa County Attorney’s office. I’m so glad to see that you’re here to help, not hurt, those among us disabled by serious mental illness who face a greater likelihood of criminalization and incarceration than community treatment or hospitalization in Arizona. The class war will wage on, so to speak, and I still anticipate to lodge plenty of opposition to your policies on other fronts, but consider yourself hugged by a left-wing radical (I could face repercussions for that, you know…).

The discussion you facilitated today about how our community responds to mental health crises among the most vulnerable citizens at potentially volatile moments in their lives was a vital contribution to this dialogue. Your strong stance that many of the SMI in the system should have been diverted before being criminalized - and your willingness to play what role you can in seeing that happens more often - was greatly appreciated. I’ve seen too many county attorneys over the years wipe their hands of the problem, locating not only the solutions but the leadership to find them elsewhere, even though the bodies were piling up at their own doorsteps.

You are a far more thoughtful and open-minded man that I gave you credit for. This is not an easy conversation to have, and the crowd you faced had not only law enforcement in it, but recovering individuals and family members of the criminalized among them as well - ready for a fight, if you came poised for one. You identified and navigated many of the complexities of the matter quite skillfully, though, posing the important questions we need to be asking ourselves and each other without shying away from your own opinion on the matter - which you managed to assert based on sound argument, rather than just the authority of your office. You also cultivated an atmosphere where more critical discussion could occur - encouraging some give and take, rather than dominating the room. You were gracious abut allowing dissent without conceding the positions you maintain, as well. I wasn’t expecting to see that.

But you did more than just manage the room. You accepted the responsibility you have to provide some measure of leadership regarding institutional reforms, while coaxing from the community some thoughts on the direction we want to go in. I especially appreciated that you confronted our institutional and societal failures - both within and beyond the criminal justice system - without generating defensiveness, obscuring the hurdles citizens with psychiatric and cognitive disabilities face, or minimizing the devastating consequences of criminalization. You seem far more concerned with positive outcomes for SMI suspects/ offenders - and victims, I might add - than with protecting your office from expending the effort necessary to wrestle with the nuances presented to you by our community’s failure to assure access to meaningful psychiatric treatment options and basic health care for all.

For all that I am grateful, as a person recovering with mood and addictive disorders myself (I could fairly easily end up in an AZ prison), as the sister of a formerly-homeless, dually-diagnosed Deadhead with a rap sheet, and as a citizen wishing to see less victimization and criminalization of members of my community. I left the meeting today with a sense of cautious optimism about the rest of your term in office - I’m looking forward to continuing this public dialogue, and working with you on reducing the criminalization and traumatization of persons with serious mental illness who would not be in the CJ system but for their psychiatric symptoms.

Finally, I just wanted to say that it was a show of courage to call on an audience member who you knew full well may have an argument in store for you - especially one dressed up like an outlaw. For all you knew I even had theater planned…neither was necessary, though. Thank you again for your time and willingness to engage thoughtfully on these issues of late. 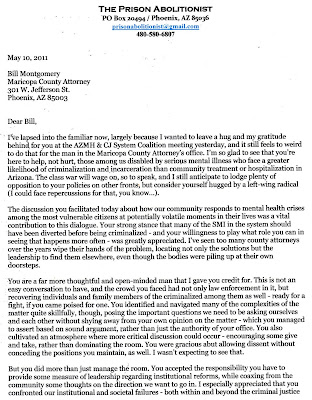 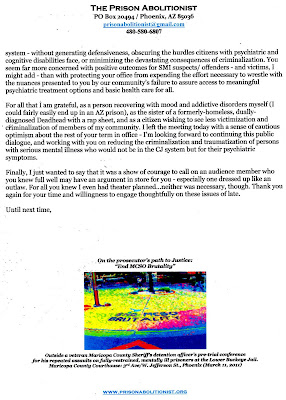 Posted by Margaret Jean Plews at 4:12 AM