Corruption and extortion at the AZ DOC: There are no safe places in prison....

To paraphrase a young transgender activist in Phoenix, the best we can do in such a dangerous world sometimes is help people create places they can be brave, because safety isn't attainable. That means looking out for eachother. This is especially the case when you're confined in hell where the people responsible for assuring your safety who hold the keys to your cage are the ones perpetrating the worst violence. The prisoners who most often end up being victimized by sociopaths behind bars in orange and brown alike are the mentally ill, developmentally disabled, the very young, the very old, gay and transgender prisoners, and others who are socially-isolated. Take it as a given that the prisons are being run by bullies of all kinds, including the ones they call noble public servants. Good for this prisoner and his family for busting this one.

Sadly, this story of a prisoner being threatened and extorted with the complicity of a law enforcement officer is not that far out - if you have a loved one telling you similar stories, don't just assume they're lying to make their jailers look bad. It's so hard to substantiate their corruption, too - this guy was just an idiot; he could have made a fortune smuggling contraband and giving intel to the gangs instead, like so many other officers get away with.

Families, if you're dealing with extortion or have evidence of officer corruption, feel free to contact me and I can help you make sure it gets followed up on. Often the DOC minimizes extortion when it happens at the hands of other prisoners and the victim is seeking protective custody - "tell him he should pay his debts", is often the response I've heard families get - so don't take that as a sign that it's okay for it to happen to you or your loved one. My name is Peggy Plews; contact me at arizonaprisonwatch@gmail.com or 480-580-6807. 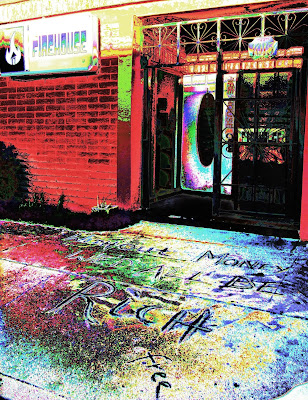 WINSLOW, AZ - Authorities say a former Arizona Department of Corrections Officer has been arrested for allegedly taking part in the extortion of an inmate.

Facing the same charges is a fellow inmate who allegedly took part in the scheme. Authorities have not released his name pending formal charges.

Martie had worked for DOC since February 11, 2013 but has resigned his position.

According to DOC investigators, Martie and the suspect inmate concocted a scheme in which the inmate threatened a fellow inmate at Arizona State Prison Complex – Winslow and demanded $900 in protection money.

Martie then allegedly offered to personally protect the victim inmate in exchange for the money to be paid by the victim’s family.

Martie allegedly made contact with a family member of the victim, saying the victim’s safety and well-being depended on Martie getting the money and gave them instructions on how to make the payment.

The victim’s family member made a partial payment, then contacted the DOC’s Criminal Investigations Unit at ASPC – Winslow and an investigation was launched.

Enough evidence was collected to arrest Martie and to prepare charges against the suspect inmate, authorities said.

The case has been turned over to the Navajo County Attorney’s Office.
Posted by Margaret Jean Plews at 9:34 AM