Until the AZ DOC shows us an analysis of the victims' and perpetrators' characteristics and motives regarding the increase in prison assaults, I don't think their planned interventions with our $18 mil can be trusted. Their budget is already $1billion, and they still don't have control over their prisons. Simply throwing more guards at the problem isn't going to solve it. Some of the violence I hear about, for example, is arising out of mentally ill prisoners' anti-psychotic medications being stopped or abruptly changed to lees-effective (cheaper) drugs. A lot of other violence is related to the heavy drug trade.

Actively psychotic prisoners are not only more likely to be assaultive towards others under stress, they're also more likely to injure themselves. There have also been a number of instances where the prisoner who is ill has been attacked by others due to his symptoms - Shannon Palmer's and James Jennings' cellies both said their victim's psychotic symptoms pushed them to kill them (Shannon Palmer's murderer's psychosis was also not being treated at the time they were placed in a one-man temporary cell together).

The AZ DOC says they don't conduct the kind of analysis I'm asking for, though I don't know how they can possibly begin to resolve issues pertaining to the violence on their yards if they can't identify who is perpetrating it against whom, and why. I hope the legislature thinks to ask them for more detail about that to compel them to look more closely at the characteristics of the victims, suspects, and motives in these assaults - that will at least tell them where they really need to be putting their people. From what I hear, the medium and minimum security yards are being run by gangs and flooded with heroin, too, so this focus on just fixing the higher security units is problematic.

Minimum security prisoners are free to go to worksites during the day and mingle with the rest of us - so why do we really need them to go back to prison at night when $10 a day could keep them at home with their families on an ankle bracelet? I think the DOC needs to focus on turning non-violent offenders back over to their communities, and making sure they succeed when they get there. That means better treatment programs for prisoners while they're behind bars, and more resources for assisting them upon release.

The prevalence of heroin is a huge problem, too: that's how the gangs maintain control, and perhaps how the DOC has kept everything from erupting into more riots than they've already had, keeping their prisoners sedated. Everyone in AZ prison has access to that garbage, but only 4% of all state prisoners get to access treatment to get and stay clean. What does that tell you about priorities and their capacity to employ "evidence-based practice" to get the most for our money?

Right now, if you're busted with drugs by the DOC - or confess to having had any - all they do is ticket you, throw you in the hole, take away your good time, and maybe even street charge you for possession - they sure don't rush you into substance abuse treatment. So, how are more security guards in close and max security going to solve that problem? They're the ones bringing in most of the drugs and cell phones in the first place.

Most of the detention cells are full of prisoners trying to escape the violence, too, who are being ticketed for refusing to house in General Population anymore and being sent off to Max and Supermax themselves - not the perpetrators. There really needs to be an audit of just who is in those higher level custody cells these days, because it isn't the gang leaders or drug dealers - they're still running the yards with the consent of the DWs. Increasingly, the close custody and maximum security calls are filling with low-level burglars and drug addicts with snitch jackets and mentally ill prisoners who are being exploited and abused in GP. The DOC needs to do something different with the money they have, not just more of the same with another $18mil.

Please, AZ legislators - stop giving DOC more money until you really know how they're spending it all, then make sure they use it responsibly,  or this monster will eat us alive. 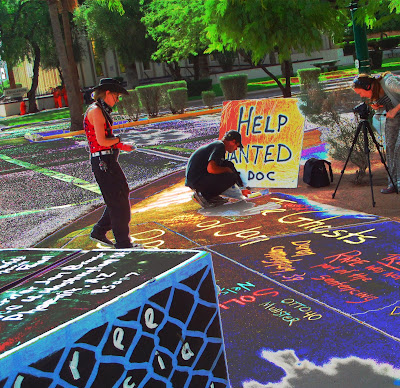 
The Arizona Department of Corrections is asking for millions of more dollars to hire more correctional officers.


They say without the extra money, the officers and the inmates they oversee are in danger.

The DOC's budget it already at $1 billion dollars. They’ve proposed an extra $18 million to fund 296 officers to work at Arizona prisons.

The department is trying to make up for the more than 500 positions lost during cuts made in 2006.

Colen Young, a former corrections office at the Lewis Prison, worked for the DOC for 18 years. During his term, he was attacked more than six times by inmates.

But it was March 1 that changed his life.

“I was attacked from the front. Someone grabbed me from the neck. I was dog piled and I kept getting hit until I couldn’t feel it any more. But I could just feel myself getting punched and kicked,” said Young.
He sustained multiple injuries and doctors say he will be permanently blind in his left eye because of the attack.

Young says at the time of the attack, four officers were watching 200 inmates at a level four prison which houses some of the most dangerous and violent criminals.

Shyla Ross, another former DOC officer, oversaw the most violent sex offenders. She was attacked August 21, 2010 after only nine months on the job. At the time of the attack, two officers were on duty watching 100 inmates.

“Two inmates being five feet away from me and being punched in the face. One inmate said he grabbed me to get me out of the way, but he ended up holding me and punching me.”

Ross also received multiple injuries. She now has a metal plate on part of her face and has had extensive dental work.

Ross and Young both say if there had been extra backup, their injuries might not have been that severe.
“The whole situation could have been avoided if they had the staffing. Every day someone goes to work and gets hurt," said Young.

Since 2009 an average of 335 officers a year are assaulted or injured on the job at Arizona state prisons.
“The close custody and the maximum custody inmates make up 21 percent of the inmate population but they are responsible for 72 percent of assault of our staff,” said Doug Nick with the Arizona Department of Corrections.

As spokesman for the DOC, Nick says the $18 million would help provide extra officers at 11 facilities where the most violent inmates are held.

But Peggy Plews, an inmate activist, says while she understands the officers need backup, she believes the money could be better spent.

"We could throw more guards at the problem but I'm not sure if that's going to solve the problem because people are being under medicated who are mentally ill and assaulting others,” said Plews.

She believes more money should go to substance abuse and transitional programs to keep inmates out of jail.

Posted by Margaret Jean Plews at 7:59 AM