Thanks to all the people inthe community who came together to stop Arpaio's racial profiling. He never did get indicted by the feds, but at least someone will be paying closer attention to his deputies' traffic stops from now on. 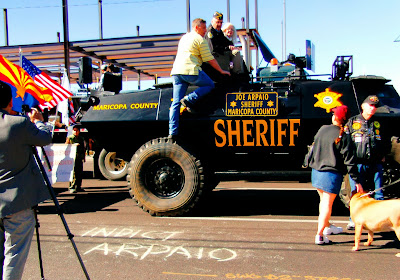 Order includes appointment of a monitor and community advisory board, recording of all vehicle stops and extensive data collection

"Judge Snow recognized that Sheriff Arpaio's years of discriminatory practices and unconstitutional policies required major change—including appointment of a federal monitor, data collection and video recording for every vehicle stop,” said Dan Pochoda, legal director of the ACLU of Arizona. “Working with the Latino community, the ACLU will seek to ensure that the MCSO’s abuses end."

“Thanks to the brave souls who came forward to tell their stories, the MCSO is being held accountable,” said Lydia Guzman of Somos America. “It’s not a crime to be brown and now we have the necessary tools to make sure that Sheriff Arpaio doesn’t forget that.”

In addition to the appointment of a monitor to keep tabs on the MCSO’s behavior, the court insisted upon audio and video recording of all traffic stops, increased training for and monitoring of sheriff’s office employees and the implementation of comprehensive record keeping. Officers will also be required to radio in the basis for each traffic stop before making contact with the people in the vehicle.

Recognizing the need to repair the MCSO’s relationship with the public, Judge Snow also mandated the creation of a Community Advisory Board, the appointment of a Community Liaison Officer and the implementation of a community outreach program.

The order’s requirements must remain in place for no less than three years, Judge Snow said.

"Under the measures put in place by the court, Sheriff Arpaio and his deputies will no longer be able to run roughshod over people’s basic rights as guaranteed by the Constitution,” said Cecillia Wang, director of the ACLU Immigrants’ Rights Project. “MCSO can no longer balk at reform.  Every person in Maricopa County deserves better than a sheriff’s department that commits pervasive civil rights violations at the expense of public safety. The court’s order will make sure the agency actually enforces the law and will no longer go on wild goose chases based on racial stereotypes.”

Judge Snow’s May decision found the policies and practices of Arpaio and his office are discriminatory, and violate the Arizona Constitution, the Fourth and Fourteenth Amendments of the U.S. Constitution and Title VI of the Civil Rights Act of 1964.

That ruling stemmed from a three-week trial in July and August of 2012, during which the civil rights organizations provided evidence to the court that the MCSO was illegally pursuing Latinos. The plaintiffs proved—through the MCSO’s internal correspondence and public statements, and statistical analyses—that the MCSO had the intent to discriminate. Evidence also showed that the discrimination had harmful effects, including higher traffic stop rates and longer stop times for Latinos.

“The monitoring, training, recordkeeping and other provisions in the court’s order today should go a long way toward reforming the MCSO,” said Stan Young, a partner with Covington & Burling. “This reform will help prevent future racial profiling of the kind that Sheriff Arpaio’s past policies encouraged. These remedies were necessary to restore public trust and the principle of equal treatment under law.”

The MCSO's widespread racial profiling created a culture of fear in Maricopa County, making Latinos anxious that getting in a car could lead to an interrogation by armed officers or incarceration at the county jail.

"The Latino community has waited a long time for the court-mandated reforms that will provide accountability and transparency to the sheriff's office and prevent the abuse of authority that has been so prevalent,” said MALDEF Western Regional Counsel Nancy Ramirez. “We are hopeful that these long-awaited reforms will bring much needed change to the sheriff's office.”

The civil rights organizations will continue to fight if Arpaio appeals, and will closely monitor the MCSO’s activities as the court’s order goes into effect.

Click here for more information on the case.
Posted by Margaret Jean Plews at 2:47 AM