Thanks to that Feathered Bastard, Stephen Lemons, for this blog this week at the Phoenix New Times. Jacking up the charges to give serious time to hard-working immigrants is brutal and discriminatory - shame on Bill. Sign the petition to stop the prosecutions and drop charges against people caught up in Arpaio's racist raids, then call Bill Montgomery at (602) 506-3411 and let him know how you feel about his version of "justice".

Bill Montgomery and ICE, Partners in Crime, To Be Protested in Monday March 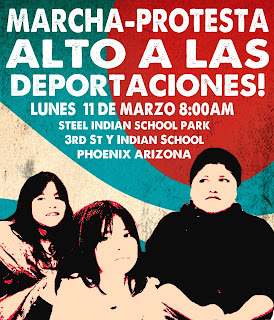 
Maricopa County Attorney Bill Montgomery and his partners at U.S. Immigration and Customs Enforcement will feel the heat of Latino and pro-immigrant rage this Monday when the Phoenix human rights group Puente spearheads a march demanding an end to the deportations of individuals whose only real "crime" is working for a living and supporting their families.

"We need immediate relief for our entire community," said Puente organizer Carlos Garcia in a press statement. "Montgomery is turning working into a crime by choosing high-level charges instead of using his discretion to allow our families to stay together."

Indeed, Montgomery's office regularly over-charges undocumented Latino mothers, fathers, sons and daughters with harsh, class four felonies for forgery and ID theft, while looking the other way when white college kids committing the same crimes are charged with misdemeanors, if that.

As I've illustrated at length, those felonies make undocumented persons, some of whom have been here for decades and have valid claims to remain in the U.S., removable from the country.

In fact, that is the reason for this grotesque, discriminatory practice by the MCAO, which was developed in part by Montgomery's predecessor, disbarred ex-County Attorney Andrew Thomas.

Despite Montgomery's embrace of the so-called SANE immigration initiative, he persists in persecuting the very people who would benefit from it. And he does this with a blueprint for deportation developed by ICE, in how to prosecute the undocumented in order to secure their deportation.

The result? Human misery and a waste of taxpayer-backed resources.

Such is the case with Julia Ojera's husband Miguel Venegas, who recently was arrested in Arpaio's immigration raid on Sportex Apparel in Tempe.

Venegas had worked at Sportex for 18 years, and the couple have three U.S. citizen children, who are upset by their father's incarceration.

"My children ask me where their father is and I don't know what to tell them," Ojera states in Puente's press release.

Venegas may face an excruciating, six month wait or more before trial, during which his life with his family hangs in the balance.

And he is only one of hundreds treated this way every year by the MCAO.

This injustice must come to an end, which is why I applaud Puente for their efforts, including this march, which is scheduled to begin 8:00 am Monday, March 11th, at Steele Indian School Park (3rd St and Indian School), go on to ICE Headquarters (2035 N. Central Avenue), and end at Maricopa County Attorney Bill Montgomery's Office (301 W Jefferson).

The message: Until we have justice, Monty, there will be no peace, and the protests will roll on.
Posted by Margaret Jean Plews at 6:39 AM