I've been hearing nothing but complaints about Wexford since they took over - especially about the delays in getting prescribed medications to people. The biggest snafu next to the Hep C incident seems to be the 4 cases of Botulism at Eyman in August, though, which no one is talking about. Check out the excerpts from the letter below. Three of the botulism cases went undetected for over a week, despite the fact that the first guy who got ill was on life support and the three who ate with him (no, it wasn't hooch - they were cooking food in their cell) were begging for medical care - which they were repeatedly denied - as their symptoms progressed. One guy told the guards it was hooch they got sick from just because that was the only way the guard would take him to medical. I'd think the CDC would have something to say about the prison medical (and security) staff blowing off something this significant... 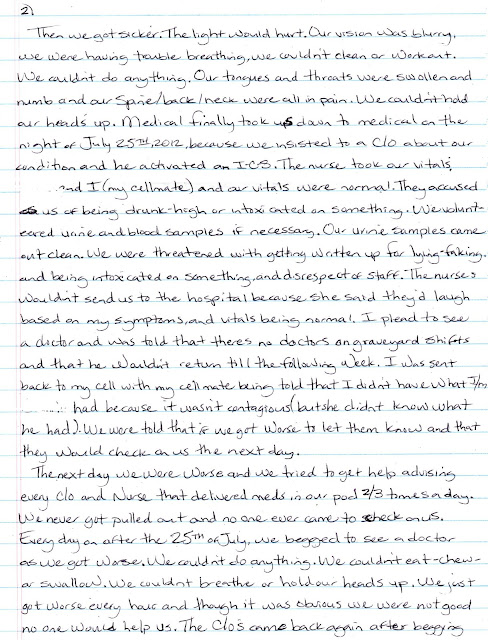 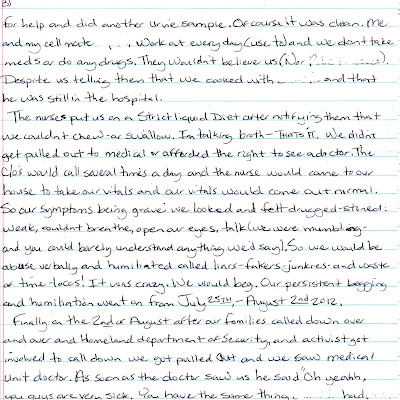 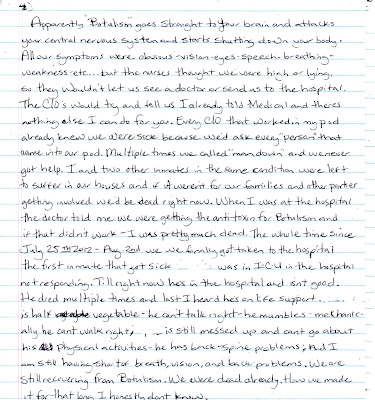 The Arizona Department of Corrections has levied a $10,000 fine against Wexford Health Sources Inc., a new private medical-care provider for inmates that is accused of improperly dispensing medicine  and wasting state resources.

The DOC called on Wexford to fix staffing problems, properly distribute and document medication for inmates, show a sense of urgency and communicate better with the state when problems occur.

Wexford was fined over the actions of a nurse who caused a hepatitis C scare in August at the Arizona State Prison Complex-Lewis in Buckeye, and for failing to properly report the problem to authorities.

Corrections Director Charles Ryan in a statement said the state's demands, called a cure notification, give the state and Wexford an opportunity to "improve communications and ensure the health care  needs of the inmates incarcerated by the State of Arizona are being met."

Ryan was not available to answer questions. Bill Lamoreaux, a DOC spokesman, declined to answer specific questions about the matter.

Wexford was hired after the Republican-controlled Arizona Legislature pushed to privatize inmate health care to save money. The DOC in strongly worded letters to Wexford alleges the company forced the  state to use public employees to fix its deficiencies. The amount of wasted tax dollars was not disclosed. Arizona houses close to 40,000 inmates.

Lamoreaux declined to answer if taxpayers were still saving money with Wexford's services.

The Pittsburgh-based company took over inmate care July 1 after winning a $349 million, three-year contract. The company plans to appeal the fine, according to Wexford spokesman Jason Rose. Wexford, in a letter to Ryan, contends the conditions of health care in the state prison system were poor and problems existed prior to privatization.

The Arizona Republic learned of the punishment after filing a public records request Friday. The state on Sept. 21 sent a seven-page letter to Wexford outlining the company's alleged deficiencies, according to  documents obtained under the Arizona Public Records Law. The state on Friday notified Wexford it had until Oct. 22 to respond to the notice.

In that letter, the DOC says:

A Wexford nurse on Aug. 17, at the Arizona State Prison Complex-Perryville in Goodyear, improperly administered medication to an inmate by having the inmate "lick the powdered medication from her own hand," instead of putting the medication in a small cup of water.

In August, the state learned that "a significant number of inmates may not have been receiving their medications as prescribed due to expired prescription(s) and inappropriate renewals or refills." The state said Wexford showed a "lack of urgency" to correct the problem, and the state had to deploy staff "to identify inmates in need of medication renewals."

An inmate was found hanging from a sheet in his housing unit in Florence on Aug. 23. The state determined that the inmate had not received his psychotropic medication for the entire month of August,  prior to his hanging, and Wexford's failure to deliver the medication was a "significant, non-compliance issue." Records do not indicate if the inmate survived.

On Aug. 27, a nurse hired by Wexford contaminated a vial of insulin, potentially exposing roughly 100 inmates at the state prison in Buckeye to hepatitis C. Another Wexford nurse was aware of the problem
Aug. 27, but she did not file an incident report until Sept. 4, violating policy. The state was forced to deploy additional compliance monitoring staff to correct the problem. It said Wexford failed to follow established nursing protocols, mismanaged documents and engaged in inadequate and inaccurate communication.

At the Goodyear prison, meanwhile, a known case of whooping cough, a reportable infectious disease, went unreported to DOC staff and Wexford's state-level management for 30 days, indicating a "lack of
urgency" and a "lack of awareness of the situation's potential seriousness."

"This is more proof that privatization is not saving us money, not providing better services and is not any more efficient," said Caroline Isaacs, program director for the prison watchdog group American Friends Service Committee. "While the state clearly had its problems, just inserting another layer to the bureaucracy is no way to address the problems, and it complicates the matter."

Wexford, in a letter to Ryan, said it believed in being held accountable, but added the DOC "must recognize that the system that was in place less than 90 days ago was extremely weak." Wexford also
said 34 people who were previously in state prison management positions were hired by the state as monitors, and that has created a void in "leadership and institutional knowledge that Wexford Health is
working hard to fill."

Wexford said those monitors are the same people who allowed the system to get to its current state, and they have interfered with Wexford's efforts to provide appropriate health-care services to inmates.

Before the problems in Arizona, Wexford had issues in other states.

Clark County, Wash., declined to renew a contract with Wexford in 2009 at its county jail and juvenile-detention center after complaints that Wexford was not dispensing medications to inmates in a timely fashion.

And New Mexico terminated a statewide contract with Wexford in 2007 after an audit by that state's legislative finance committee found shortages of physicians, dentists and other prison medical staff, and
noted that Wexford had failed to issue timely reports on the deaths of 14 inmates the previous year.
Posted by Margaret Jean Plews at 11:53 AM