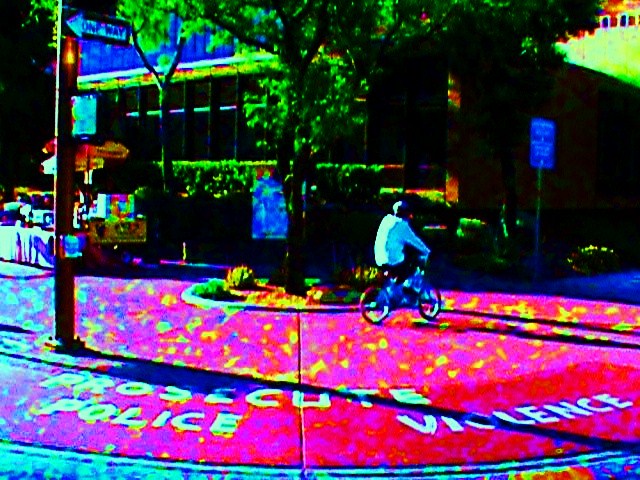 Several other community members showed up for MCSO Lower Buckeye Jail officer Kevin Gerster's Final Trial Management Conference in Judge Verdin's court yesterday morning, anticipating that he may enter a plea to avoid the humiliation of trial and certainty of a lengthy prison term upon conviction - especially in light of that video tape and the public attention back on him. All they did was put off the trial and buy time to negotiate over a plea deal.
After dropping charges against victim William Hughes' other assailant, MCSO Detention Officer Alan Keesee (whom I intend to ask the feds to prosecute under Civil Rights law, since AZ doesn't want to hold him responsible), Bill Montgomery's office will look pretty foolish if they don't insist on a stiff sentence for Gerster - though they were awfully friendly with him yesterday as we were all leaving court - I swear I even saw the county attorney now handling the case, Rebekah Prichard, make eye contact with him and graciously say "thank you".
About her, I was glad to see her on the job, I must say - Game Boy was there and I was prepared to light into him if the plea deal sold out the People's interests in public safety by condoning the abuse of mentally ill prisoners, but as soon as I made my presence known to him, Prichard made her responsibility for Gerster's prosecution known to me - though maybe it's been her's all along. I'd appreciate any thoughts folks have on her - I don't have much to go on, but she's definitely more aggressive than the guy I'd been watching handle this thus far.
Maybe Prichard asked for some time if the case is new to her - I don't know. The fact they took this all back in to chambers once Gerster's attorney arrived concerns me, though - I want to know what they've offered him. Most of all I want to see the trial - I can't begin to speculate as to how can he justify what he did.
Maybe he or Keesee somehow managed to get that MCSO youtube footage thrown out of court in a secret move. I wish the MCAO was being more forthcoming and transparent about all of this. We really need more members of the community to call and inquire about their intentions - we, collectively, were victimized by Gerster, too: he brutally assaulted at least two fully-restrained prisoners posing no threat whatsoever in the psych ward of the jail, betraying his duty and our trust - all while on the taxpayer's dime. That's pretty bad as far as criminal deeds go.
I don't know why they aren't prosecuting the cops who witnessed Gerster's first recorded assault but didn't report it, too. They're on the videos. If they did report promptly and the MCSO just dragged their feet investigating their own, it would seem as if a substantial claim can be made against the county for the assault on Hughes being a result of willful indifference to human life at a level beyond Gerster and his own abusive pathology. In any case, it seems there was a conspiracy of silence that permitted him to continue working and abusing people for five months after breaking Michael Flores' jaw while he was strapped naked down to a table.
The MCSO tolerates this kind of treatment at the highest levels, apparently - Sheriff Joe's new right hand man, Jerry Sheridan, suggested that Gerster's victims even asked for it when he said one "must have been mouthing off ", thus provoking Gerster's assault. I think that was Hughes he was talking about, who had his hands cuffed behind his back, his arms restrained by three other guards, his feet in shackles, his head in a bag (remember Abu Ghraib?), and nothing but underwear on when Gerster stomped on his neck, punched him repeatedly in the head, kicked him, and (off-camera) slammed his face into his cell wall.
I suspect William's single biggest crime precipitating his victimization, actually, was probably laughing and smiling too much. He was ordered by the judge that day to undergo a Rule 11 competency hearing, which presumable had something to do with why he was put in the psych wing of the jail to begin with. Of all places, you'd think they'd be a little kinder and gentler there as a rule. No wonder it takes so long to restore people to competency - they're subjected to constant terror and trauma, witnessing this kind of abuse go unpunished all too often.
So, that's the outline of Gerster's crimes, for those of you who missed it the first time. How's that for a noble officer of the law, folks? When I was a kid, I thought that badge and uniform made them all heroes - what a crock. The empowerment of creeps with guns, badges, and way too much authority to abuse is a public safety threat in and of itself. I'd think the other cops would be harder on people like Gerster and Keesee than even I am, for what guys like them them all look like - people who protect and serve pigs and thugs before the public that employs them. But they threw Chrisman a barbecue when he got sacked for killing Danny Rodriguez, so what do I understand about cops?


Anyway, as I said there's a plea on the table for Gerster, but I don't know what it is and the court wouldn't discuss it openly. Judge Verdin is convinced that both parties are trying to work towards an agreement (UGH) in good faith instead of go to trial, but frankly, I think justice in this case demands a public trial - I hope the county prosecutor goes all the way. It's all been put off for two more months, though, for some reason. I suspect that's what the prosecution thanked Gerster for agreeing to - I just feel like they're stalling hoping the attention to his case wanes and they can slide something clearly unacceptable by us unnoticed. It wont and they can't. But, I'm in the dark on all that, so take that for what it's worth and contact the county attorney's office yourself for their answers.

I think the public that entrusts our most vulnerable citizens to the MCSO's care - at great expense to us - is a legitimate victim, but we may have to fight to get anyone else to agree. There's a reason they are called "public servants", though - they should be held to answer to us when they betray our confidence and trust.

Here are Gerster's upcoming court dates. Look for him to enter a plea, though, so don't wait until August to register your concerns. If it's a deal that Montgomery is about to be embarrassed by us about, they may just take it off the table and turn up the heat on this guy. I haven't seen him begin to break a sweat, and he hasn't spent a night in jail pending trial. He must already think he's home free. I bet he's a security guard somewhere already...