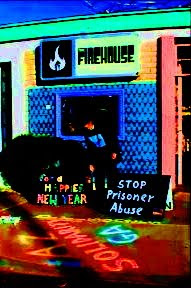 
This is astonishing: they're actually prosecuting those corrections officers for battery! Keep in mind that we still have prisoners from the biggest prisoner strike in US history missing and in harms' way, though. That story follows this one.

By Rhonda Cook
February 21, 2011
The Atlanta Journal-Constitution
Seven Georgia prison guards were arrested Monday on charges of beating an inmate, inflicting injuries so severe that the prisoner was in the hospital for "an extended period of time," according to the Georgia Bureau of Investigation.
GBI spokesman John Bankhead said the seven -- Christopher Hall, Ronald Lach, Derrick, Wimbush, Willie Redden, Darren Douglass Griffin, Kerry Bolden and Delton Rushin -- were arrested Monday morning when they reported to work at Macon State Prison. The facility is located in Oglethorpe, about 50 miles southwest of Macon.
All are charged with aggravated battery and violating their oaths of office.
At the request of Corrections Commissioner Brian Owens, the Georgia Bureau of Investigation was asked to investigate allegations of incidents at Macon State Prison and Smith State Prisons on January 5, 2011.
"I appreciate the GBI’s swift response in investigating these allegations and assisting with the Department’s non-negotiable mission of protecting the public," Owens said. "We have an obligation to protect the public and that includes staff and inmates."
The GBI investigation began amid reports that guards attacked inmates at two state institutions – Macon State Prison and Smith State Prison near Savannah. The alleged assaults came at the end of a six-day protest and work stoppage at nearly a dozen facilities.
According to a newly formed advocacy group -- the Concerned Coalition to Respect Prisoners' Rights -- inmates Terrance Dean and Miguel Jackson were "brutally beaten by guards" because they joined the protest. It was not clear which inmate was hospitalized but Dean is at the Augusta State Medical Prison, according to the Department of Corrections website.
Both men are serving 20-year sentences. Dean, born in 1981, was convicted in Bibb County for armed robberies in 2003 and 2004. Jackson, born in 1975, is at the Georgia Diagnostic and Classification Prison near Jackson for several convictions, including armed robbery and aggravated assault.
Bankhead said the investigation was continuing.
“It’s not closed. We’re still investigating,” Bankhead said.
He did not know if more arrests were expected.
Inmates at 11 prisons began refusing to report to work details in early December. Four prisons responded with lock downs, which meant inmates could not make calls from the phones in the cell blocks, nor could they receive mail.
Please read the rest here.
--Staff writer Christian Boone contributed to this report.
Posted by Margaret Jean Plews at 6:50 AM