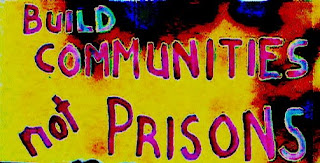 At least, that was a big thing I got out of the press conference: NO NEW PRISONS! We can't even take care of the prisoners we have, after all.

Caroline Isaacs and Matt Lowen (mlowen@afsc.org) at the American Friends Service Committee office in Tucson are excellent resources on the politics of private prisons in Arizona, and have done extensive research on both the issue of prison privatization, and the abuses of solitary confinement (see Buried Alive: Solitary Confinement in Arizona's Prisons and Jails).

I especially encourage prisoners, family members, and lawyers and activists pursuing civil rights suits on the conditions of confinement in Special Management Units (SMU) and prolonged detention/isolation to contact them about their research into the effects of such treatment. The National ACLU has recently announced a campaign to end the abuse of solitary confinement, particularly as a management tool for seriously mentally ill prisoners (which is too often done instead of providing medical/psychiatric treatment).

You can reach them at:

PHOENIX -- A private-prison watchdog group says questions about safety and cost should prompt state leaders to cancel a plan to privatize 5,000 prison beds.

Representatives of the American Friends Service Committee met with state leaders Tuesday to hand over research they've conducted about private prisons in Arizona.

The group's findings include revelations that Arizona pays private prison companies $55 per night for medium security inmates, while it only costs $48 for the same inmates in state-run facilities.

"And the evidence overwhelmingly shows that for-profit prisons are more expensive, less safe and are not accountable to the tax payers," said Caroline Isaacs, who is the AFSC Arizona program director.

Last summer, the Arizona Department of Corrections canceled a plan to privatize 5,000 prison beds, after three inmates escaped from a for-profit prison in Kingman. The prison break resulted in a multistate manhunt. Authorities say two of the escapees murdered a man and woman in New Mexico while on the run.

At the end of January, the state reopened the contract process for the 5,000 prison beds after the director of the Department of Corrections issued new rules for oversight of private prisons.

Isaacs said the state needs new laws that tighten private prison reporting requirements to ensure the facilities are safe and economical. She also called on Gov. Jan Brewer and state leaders to scrap the plan to expand the private prisons already operating in Arizona.

We wonder how many corrupt officials in Navajo County received mordita for supporting private prisons.