This took about ten minutes. Do it, please, every week from now until Davon is home.
And check out this fellow, William Macumber, too, and take a minute to sign his petition. We have to give the Governor reason to free all those folks the Board of Executive Clemency has already said should be free, or Davon doesn't have a chance. People signing these petitions and calling or writing her office (the phone lines were jammed today) will probably be more effective than me breaking out my chalk right now.

I'm sure you folks already know his story - Davon is a 23 year old state prisoner who needs treatment for Hep C, and since the ADC won't give it to him (probably because he has a serious mental illness, which raises ADA issues), his mother is seeking a pardon so she can bring him home; he's getting very ill.

Please get on Ryan at the ADC to give Davon the best medical care there is, and consider him seriously for a pardon as he makes his way through the process. I know that too many people seeking compassionate release died in prison despite the Board ruling in their favor because Governor Napolitano lacked the courage to let them go home. Davon's a good kid - please don't let him fall victim to the same kind of politics.

Thank you for filling out the Governor's Contact form. We appreciate your contacting the Governor's Office.
We will review your form submission and contact you if requested.

You are now being redirected to the Governor's home page
http://www.azgovernor.gov/ 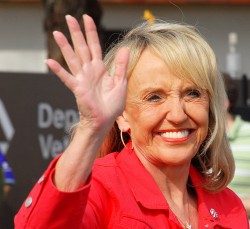 Thirty-five years is a long time. It's particularly long if you spend it in prison. However, 35 years is an eternity when you spend it locked up for a horrendous crime you didn't commit. Just ask William Macumber, who's been locked up for the last 35 years for a crime the Arizona Board of Executive Clemency says he never participated in.

That's what the Board told Arizona Governor Jan Brewer last year, in a letter recommending the state release Macumber from prison. And yet Governor Brewer rejected their recommendation without reason, leaving many to question Brewer's motives for keeping an innocent man behind bars.

William Macumber was convicted of a double murder in 1975. According to the testimony of his then-wife Carol, Macumber confessed to killing a couple in the desert 12 years earlier, a crime that had remained unsolved until that time. The Clemency Board found Carol's testimony to be unreliable, while Macumber's attorney and their own son have suggested that she actually used her position with an Arizona Sheriff's Department to fabricate some of the evidence used at the trial. As if that weren't enough, another man has actually confessed to the desert killing. Despite these facts, Macumber remains in prison — a 74-year-old man with heart problems and arthritis, a man who should be enjoying time with his grandchildren, not watching his days pass behind razor wire.

Why would Brewer keep Macumber behind bars? Some speculate that her reasons are linked to the fact that she's running for reelection this year, and needs all the help she can get. Brewer — who's built a national reputation, thanks to her support of Arizona's highly controversial anti-immigration law — appears to be playing it safe with this case, preferring to avoid any political risk involved in pardoning a man, such as seeming soft on crime.

It's extremely rare for a Clemency Board to make such a recommendation on a case as old as this and even more unusual for them to claim an inmates innocence. However, it's unheard of for a governor to basically ignore their request with no official reason.

Join us at Change in urging Governor Brewer to reconsider her position. Let her know that the nation is watching — and knows that she's preventing an innocent man from being freed.

Posted by Prison Abolitionist at 4:25 PM