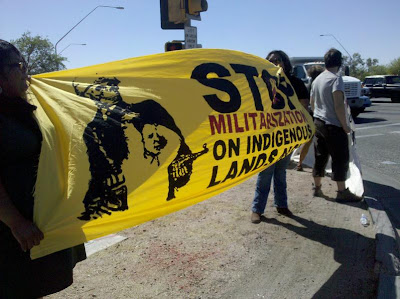 Tucson, AZ – At approximately 1:00PM Friday, May 21, 2010 more than a dozen people occupied the Tucson Headquarters of the US Border Patrol to draw attention to impacts of border militarization in Indigenous Communities. Six people, including Alex Soto a member of the Tohono O'odham Nation and a volunteer with the group O’odham Solidarity Across Borders, locked themselves together for up to 3 and 1/2 hours. “Indigenous voices have been ignored. In our action today we say NO MORE!” Said Soto.

Banners were hung, including one placed over the reception window that read, “Stop Militarization of Indigenous Lands Now”, traditional songs were sung and the group chanted, “Border militarization destroys Indigenous communities!” and “No raids, no deportations! No SB1070, no racist laws!” Approximately 30 Border Patrol agents flooded the lobby of the headquarters and scrambled to react. Roads to the headquarters and adjacent air force base were shut down. Tucson City Police were eventually called and began preparing an extraction of the peaceful resisters.

A diverse crowd of up to 70 people quickly gathered outside the Border Patrol headquarters to support those locked down inside. Ofelia Rivas of O’odham Voices Against The Wall, an elder in support of the action stated, “It was a historical and powerful moment for people of all color to unite with O’odham to stand in solidarity for human rights and to see the next generation take a stand”.

At approximately 4 o’clock the peaceful resisters negotiated the conditions of their release on their terms. Their requests to consult with Tohono O’odham elders to negotiate terms of release were denied by Tucson Police. The protesters decided to unlock and were cited for two misdemeanors each of trespassing and disorderly conduct. The resisters were released just outside the premises to join supporters where they gathered in traditional prayer and rallied against border militarization for another hour. Community members including members of the Pasqual Yaqui, Tohono O'odham, and Dine' Nations reacted emotionally when two Wackenhut Corp. buses left the Border Patrol compound filled with undocumented people. The detainees responded with returning the symbol of resistance - a raised fist.

“This is just one action of many that makes visible the invisible crimes against humanity that occur every day on the colonial border,” stated one of the peaceful resisters. “We commit to honoring the prayers and call for support of the people most impacted by border militarization, the Indigenous Peoples who’s lands we are on and migrants who seek a better life for their families. We cannot not allow government agencies, border patrol, ICE or reformist agendas to further their suffering. We will continue our actions of peaceful resistance for human dignity and respect for all peoples.”

The action also denounced SB1070 and HB2281 as racist laws that are a part of an ongoing system of genocidal policies against Indigenous Peoples and migrant communities.

Posted by Prison Abolitionist at 10:59 PM