From Stephen Lemons' blog, "The Feathered Bastard," at the Phoenix New Times. The rally last night in Phoenix to legalize medical marijuana (a ballot initiative petition drive is underway) was timely; if pot was legalized for all and we could buy it at a pharmacy or grow our own, we could do a lot to boost Arizona's economy and tax base, and cut down on all the crime that accompanies drug-smuggling.

As for this story, we'll see how it plays out, but it looks like it's going to just be uglier than it already was. How it was determined that these guys are "possibly undocumented" - except that they are "Hispanic" - is unclear, and asserting that assumption alone at this particular time disturbs me.

I've read and heard other accounts of what happened with this deputy. It's too bad this guy was following these suspects so long in the desert alone, or they might have caught them and avoided gunfire. Since they were on foot, you'd think he could have gotten back-up with helicopters and everything before they even had a chance to spot and fire on him - especially if they were lugging a bunch of marijuana with no vehicle (how did he know what they had?).

Not that I don't believe the deputy's account; it's just a considerable amount of conjecture has been embedded in the "news" reporting of it. It doesn't appear as if he was actually able to check his suspects' documents or cargo while they were shooting at him. Reportedly, they fired about 20-30 semi-automatic weapon rounds before taking off.

I'm boycotting drug cartels, by the way, because of the violence - and would like to add to that list Pfizer, Bristol-Myers Squibb, and all the other pharmaceutical pushers that exploit patients, torture animals, and kill third world "subjects" for profit, while depriving others of life-saving treatment if they can't make a buck from them. If medical progress via pharmaceuticals is a gift from God, those guys have absconded with something that belongs to all of us, and they hold our sick and dying loved ones for ransom every day. I know; I pay.

More Americans died for lack of ability to pay for health care last year, by the way, than were killed by undocumented immigrants, but you don't hear Russ Pearce or the Arizona Republican Party naming our dead as they push bills to "protect" us through the legislature - or championing our right to life.

Instead, they hoard resources stolen from the public in private tax shelters, cut more children, elderly and disabled people off of health care and social services, brutalize the teachers for protesting them, and criminalize anyone who disagrees with them. In my book, that makes the Arizona GOP both fascist and anti-American - and far more of a threat to the ordinary Arizona resident's survival than the drug cartels.

Anyway, as Lemons points out, SB1070 would have done nothing to prevent the incident with this deputy, nor would it have prevented the murder of the rancher a few weeks ago. Repealing it can prevent a considerable amount of violence being done to Arizona's Latino community, where even long-standing citizens are learning that it's never safe to call the cops.

Never mind that violence rates along the border have in fact remained flat for the past ten years. Every Latino-looking male in this state, today, is a suspect in this deputy's shooting, of course, and is presumed, as usual, to be in the US illegally. The Minutemen and militia extremists, (what a bunch of nuts. Just for the record, I saw no "feral foreign invaders rioting" at the capitol this week) and nativists like Shawna Forde (who murdered a Latino family several months ago) are going to pick up on this incident with delight and use it as an excuse to perpetrate more violence against the rest of us, be it with their laws or their guns, or both.

Arizona Militia units are on "Ribbon Status" now, by the way, and they've called for citizens to go out and buy five boxes of ammunition to celebrate "Cinco de Ammo" on the 5th of May. Those guys are scarier than the cops. Some might even BE cops. What could they possibly be planning to do with their guns and ammo? Are they going to shoot us all in the streets for resisting their right-wing rule?

The hell with them. They are deeply disturbed. Those people do not stand for America; they only stand for themselves. In any event, I'm with the guy who says "I'm Mexican. Pull me over", and am still going undocumented. We have to stop these people here. 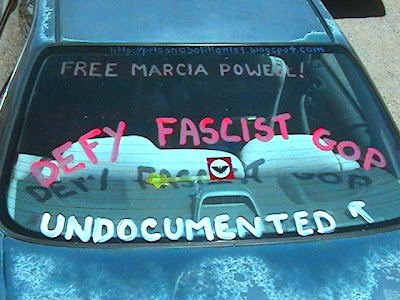 
A Pinal County Sheriff's Deputy was shot and wounded today by suspected drug runners smuggling an unknown quantity of marijuana through the desert.
The Pinal County Sheriff's Office identified the injured Deputy as Louie Puroll, 53, a fifteen year veteran of the department. PCSO spokeswoman Lt. Tamatha Villar said that Puroll was doing well, and had been transported to Casa Grande Regional Medical Center for treatment.

She described his injury as a "grazing wound" on the left side of his body above the kidney. Puroll identified the weapon as a high-powered assault rifle, possibly an AK-47.
Puroll was on patrol in the desert when he came across "five Hispanic males, possibly undocumented" transporting a load of marijuana.
He also saw two long gun rifles on them, according to Villar. They fired on Puroll. Puroll returned fire, but is not sure if he hit the suspects.
A manhunt is underway, with Pinal County being joined by the Border Patrol, MCSO, Arizona DPS, the Casa Grande Police Department, and other agencies. Villar said there was no vehicle involved. The men were on foot.

Fortunately, Puroll was not killed or injured more seriously than he was, but you can bet that this incident will become a battle cry in the ongoing debate over SB 1070, Arizona's new immigration law.
That law would have done nothing to prevent an incident like the one today. Nor would it have saved the life of southern Arizona rancher Rob Krentz, who was murdered, many believe, by drug or human smugglers.
But that won't matter for the debate, as we soon shall see.
Posted by Prison Abolitionist at 12:12 PM