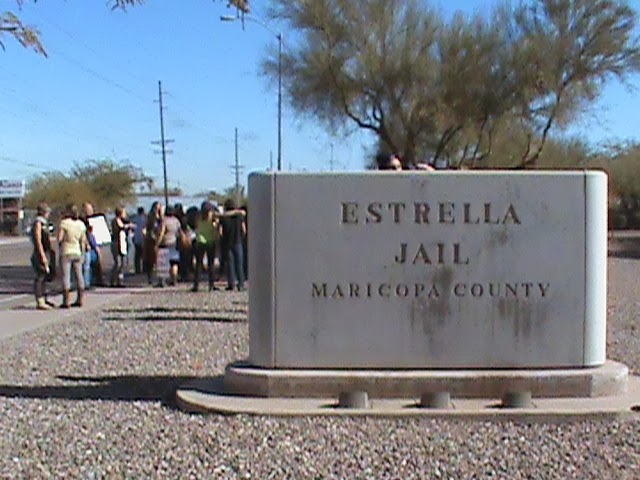 ( Solidarity Action outside Estrella Jail: circa 2012)

This is really remarkable, what's been taking place at the county jail -
the prisoners are organizing and being heard!!!

Here's my initial blog post about the hunger strikers at Estrella Jail. If anyone has any updates, hit me here: Peggy Plews arizonaprisonwatch@gmail.com or 480-580-6807.

Where the hell is the County Health Department and all the right-to-lifers who love Sheriff Joe? A woman lost her unborn child to this man's rotten food - that's what this is about. Rocks, hair, spit, mold, and disease that gets ignored by medical staff - that's what people get in their hot meals, and why they're protesting. Check it all out below:


"The Ladies in Cell Block C100 continued on with their Hunger strike until Thursday night. They told me they weren't even feeling all that hungry. They were sad that they took Rebekah away and were very grateful to have someone to just listen and believe them about the food. The ladies were just fighting for safe food because their are a lot of people in there who can not afford canteen so they have to eat the jail food and when it's moldy and makes you sick that is not right.

Rebekah is still in solitary confinement and she ended up accepting her food Wednesday Night. The Guards just through her food in her cell through a slot... She says it's so quiet and completely closed off from everything. 23 hours of dark quiet isolation from everyone. All because she took a stand and said I refuse to eat moldy food. Rebekah even spoke to ----- who told her that over the weekend the carrots missed there rotation causing contamination of all the food on the plate because the carrots were touching the other food on the plate. So they had a reason for their Hunger Strike, rotten carrots. No one should be forced to eat unsafe food.

So when I spoke again to the ladies in C100 cell block they were just so happy to hear that someone really believed them. That's all they wanted was someone to look past what they have done and say they are in fact Human Beings and they deserve the right to have food that is not rotten and moldy.

So the last I heard is Rebekah is still in solitary confinement. That was Friday Morning around 8 am. The other inmates I last spoke to Thursday Night and that was when I found out they were still going strong with the Hunger Strike and I told them If they felt the food was safe they should accept it so maybe Rebekah could get placed back with them again. They miss Rebekah and like I said they just wanted safe food to eat and someone to listen about the deplorable conditions of Sheriff Joe."

Then I found that this was posted to AZCentral on Friday, Valentine's Day: HOORAY!!! Execpt for this part, at the end of this article:

"Arpaio said Friday that he now has another idea for what to do with the rejected food — he will give it to the inmates in the veterans wing."

What's the deal with giving the rejected, spoiled food to the Veterans, Sheriff Joe? I think it's time you retire.

In any case, keep it up everyone! You have people out here behind you - friends and family, spread the word!


Some male inmates at a Maricopa County jail are joining in a food strike initiated by their female counterparts earlier this week.

Sheriff Joe Arpaio announced Wednesday that nine women at Estrella Jail were refusing to eat dinner, and he attributed the fast to a new all-vegetarian menu. Officials on Friday said women are still protesting the food.

Then, on Thursday evening, a reported 90 men from the Durango Jail on Gibson Lane protested their evening meal.

Of the 90 who didn’t eat dinner, Arpaio said, 89 did accept brunch, which included a peanut-butter sandwich. The same trend was reported in the women’s facility, as well.

One Durango inmate who joined the protest said the menwant better quality food.

An inmate who identified himself as Mathew Hardy said that he and various inmates have been to several other jails in Arizona and that they’ve never encountered such bad food.

“My dogs eat better food than what we’re fed here,” Hardy said. “We’re not asking for great food, just better than we get.”

Hardy said there have been isolated incidents of rocks in food and a clump of hair found in a peanut-butter packet.

Hardy said that he plans to continue the strike and that a higher quality or quantity of food would make him eat again. The inmates are restricted to two meals a day.

Hardy denied that he took his early meal on Friday and said that he knows of at least a few others who didn’t.

After Hardy’s interview, jail officials reconfirmed that only one man refused his brunch packet.

That man identified himself as Prentis Bey, although jail officials say his last name is James.

Bey said the motivation for his hunger strike was in solidarity with the women: “If a woman does it, I’m gonna do it. That’s what men are supposed to do.”

Bey said he was unaware that he was the lone inmate who didn’t accept the brunch.

Arpaio said that the hot meal of the day consists of soy, oil, a vegetable, potatoes, cookies, bread and powdered milk and that the daily intake is 2,600 calories.

Arpaio said Friday that he now has another idea for what to do with the rejected food — he will give it to the inmates in the veterans wing.