I am a Phoenix area artist, freelance writer, and human rights activist known for my concern about Arizona' prisoners. This week I was contacted by the wife of a California Department of Corrections prisoner in Corrections Corporation of America's LaPalma Correctional Center in Eloy, AZ. They've been having  a lot of trouble in their prisons in Eloy lately. As you can see from the letter and attachments below, several Jewish prisoners have begun to fast  after extensive efforts to resolve the problems with CCA's  lack of respect for their religious rights. If what they report is true, then CCA is out of compliance with the law and there's no excuse for it.

I'm sure this is something you'll be deeply concerned about, as I am, and expect that you will  put in a good word for the US Constitution with Warden Jim MacGregor at LaPalma prison. He can be reached at 520-464-3200. Since you're so proud to be on the CCA board and used to be a US senator, this seems to be something you should take some responsibility for resolving.

We all look forward to your response.


We'll see if he condones this...
Here's a little background on DeConcini and CCA, by the way...

My name is Annie Santiago.

My husband, Kenneth Santiago, is a prisoner of the state of California, in a private prison in Eloy, Arizona run by  Corrections Corporation of America. His CDC # is F03822.

Kenneth reports that as of May 7, 2013, he and several other prisoners at LaPalma Correctional Center began to fast. They are doing so in hopes of focusing the attention of the larger faith community on their more than 1 ½ year long struggle to  compel the prison administration to come into compliance with the US Constitution, recent court settlements, and the norms for human decency, regarding Kosher food service for California prisoners located in Arizona.

Documentation of the problems at LaPalma and the struggle of Jewish prisoners against harassment, unconstitutional conditions of confinement, and retaliation is attached. More will be available soon, as will correspondence directly from the  prisoners themselves about their objectives that is, if they haven’t been stripped of their belongings and thrown in the hole already.

Yesterday morning an officer confronted my husband and the other men who were fasting, threatening to punish them with  detention if they didn’t eat. Warden Jim MacDonald told me in the afternoon that he was going to look into it, but he asserted that “hunger strikers” would indeed be inviting disciplinary action, so please do not characterize this as a “hunger  strike”.

These men are fasting in a deeply spiritual tradition, not setting their mattresses on fire or inciting riots. Why are they not even afforded the most simple respect for their efforts to adhere to their faith?

Please, whether you are media or a member of the faith community in Arizona or California, help my husband and the other prisoners get the outside world’s attention on that place there’s a bigger problem there than just what’s happening to them. Contact me at the number above for more information.

Good overview from prisoner Kenneth Santiago to a sympathetic Rabbi... 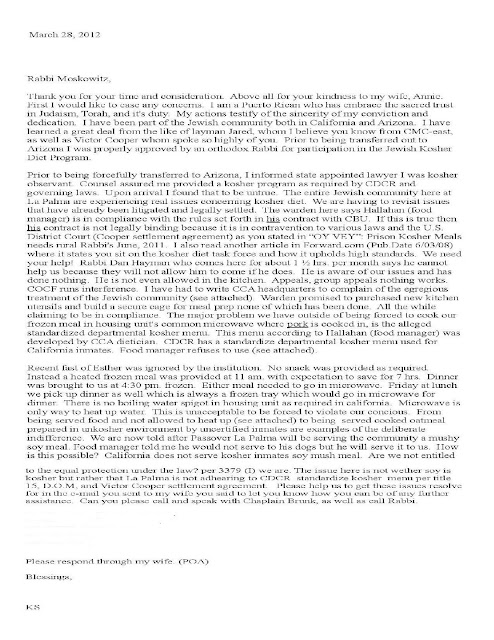 But first, the complaint was in-house with CCA's "unsung hero",
Chaplain Tim O'Dell... who apparently did not come to the rescue. 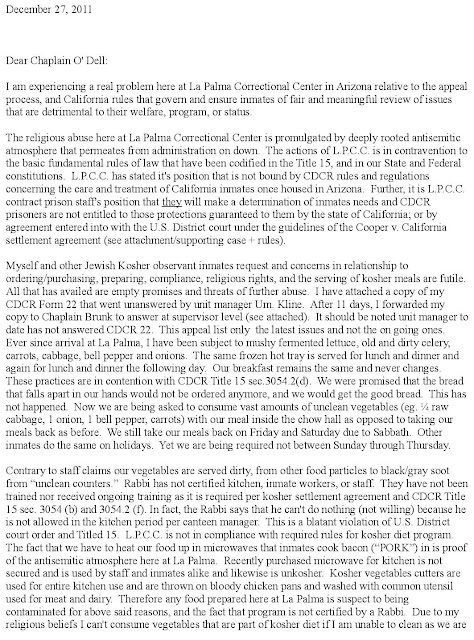 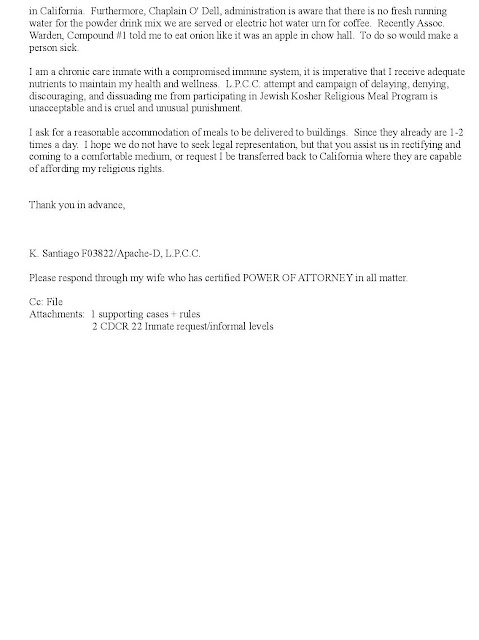