To this man's family: I am so sorry for your loss. /  Lo siento por tu pérdida.
If you haven't already been in touch with the Florence Immigrant and Refugee Rights Project, please contact them, at least so they know more about what happened. They may be able to connect you with other resources. Their contact info is:

You may also want to report the details of your loved one's death to the American Civil Liberties Union of Arizona,  which has done some work on the conditions in detention centers, prisons, and jails across the state. Their contact info is:

Here's a list of the publications they have on Immigrant Rights' issues:
The ACLU of Arizona honored International Human Rights Day by joining advocates and allies from across Arizona to deliver messages of hope and solidarity to detainees held at Pinal County Jail.

Detention Report 2011: In Their Own Words: Enduring Abuse in Arizona Immigration Detention Centers

Download and carry the ACLU’s know your rights card

Your Rights: What YOU Need To Know About SB 1070

A Snapshot of Immigration Detention in Arizona

Rights of Immigrants in a Workplace Raid: A Resource for Communities Before, During and After a Raid: This bi-lingual handbook informs people about their rights during a workplace raid in Arizona. The handbook, which is the first of its kind in Arizona, also provides general information about what workers, families, and communities can do to prepare for a raid, and steps they can take after a raid. Oprime aquí para bajar esta guia en Español.

Finally, if you have family in the Phoenix area, you might what to check out the community of migrant justice folks at: 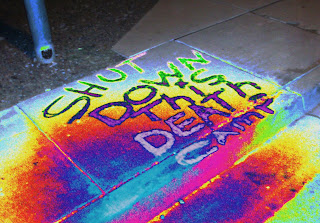 To my congress members:  stop wasting my money killing people like this!!!!
ABOLISH IMMIGRANT DETENTION!!!
STOP the DEPORTATIONS!!!


Second Immigrant Commits Suicide at Detention Center Within a Week

Activists described as alarming Friday the fact that two Guatemalan immigrants died in less than a week at the U.S. Immigration and Customs Enforcement detention center in Arizona.

“I’m concerned that there is no way for independent groups to verify what is happening inside these detention centers. It’s terrifying there were two Guatemalan suicides in such a short time and in the same detention center,” Sebastian Quinac, representative of the Guatemalan Ixim Ulew Committee in southern Arizona, told Efe.

ICE reported Thursday the apparent suicide of Jorge Garcia Mejia, 40, who was found unconscious in his cell at the Eloy Detention Center.

Elsa Guadalupe Gonzalez, 24, was also found unconscious in her cell last Sunday by other Eloy inmates.

Both had been in ICE custody since late March.

ICE said it would investigate whether suicide-prevention measures are in effect at Eloy.

The executive director of the ACLU in Arizona, Alessandra Soler, said the main problem is the “punitive” conditions in which the undocumented live in detention centers.

“Immigrants must not be treated like criminals. They are detained for administrative violations of migration, but the policy is to jail them in subhuman conditions where they are treated like prisoners, and the practice of locking them up in isolation is common,” she said.
Posted by Margaret Jean Plews at 12:42 PM