So much work is being done in this state organizing people for migrant justice, that I seldom focus on detention facilities and the despair and violence behind those bars. Tonight I must, though, as a 24-year old woman has hung herself  at a private prison run for ICE in Eloy, AZ - a classic southwest prison town, pretty much owned and ruled by Corrections Corporation of America.  The facility she died at was the Eloy Detention Center, which is one run by CCA.

That facility was featured in this article by the AZ Republic in 2009. Things haven't improved much there, I don't think. Here is a PDF print out of all ICE detainee deaths from 2003 - Dec 2012, so you can see for yourself the history.

My condolences go out to Elsa's  family and her community.

Arizonans were already planning to protest CCA in Tucson this month: if migrant justice matters to you, please join us.

Also, if you care about what happned to this woman, know that there are plenty more people in her shoes you can still help. Sign up with PUENTE and stay tuned for their announcements and direct actions. Sign this petition, please, to free the victims of Arpaio's latest raid. And demand of your congressmen and communities an end to migrant detention NOW. 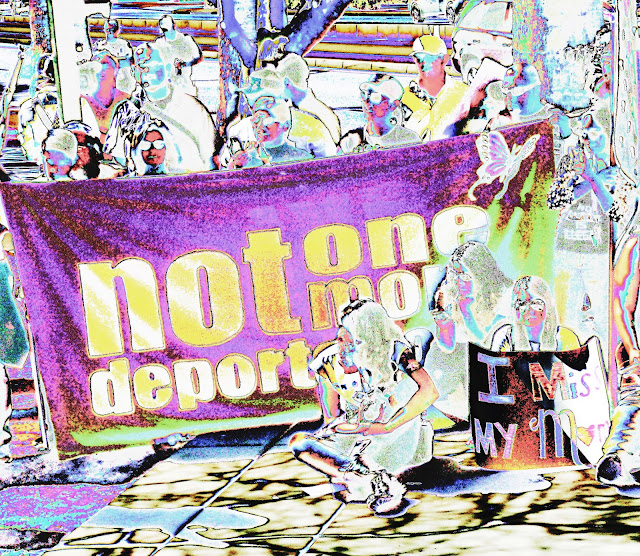 Rally at ICE in Phoenix to stop detention and deportations...
Winter, 2013

PHOENIX (AP) — Federal authorities say a Guatemalan woman in custody at the Eloy Detention Center has died from an apparent suicide.

U.S. Immigration and Customs Enforcement officials announced Tuesday that 24-year-old Elsa Guadalupe-Gonzales was found hanging in her cell Sunday evening by another detainee.

They say detention facility staff called 911 and emergency medical technicians responded to the scene, but were unable to revive her.

Authorities say Guadalupe-Gonzales was arrested for allegedly being in the country illegally. She had been detained since March 20 as she awaiting immigration hearings.

They say she was taken into custody March 18 by U.S. Border Patrol near Nogales, Ariz.