this link here is probably what you're looking for: Campbell came through, as promised, on July 23, 2013:

the rest of this post below is an old one.... 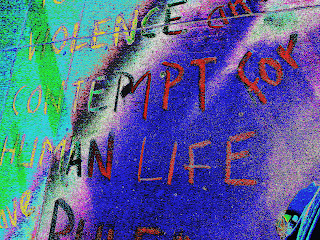 
Earlier this week, after watching AZ DOC prisoner Tony Lester lay dying without any first aid or comfort from the officers responsible for caring for him, AZ House Minority Leader Chad Campbell called for legislative hearings on the problems with the DOC, and suggested that Charles Ryan may need to leave office so the state can recover from his tenure.

Here's the clip. Bless and thank Chad Campbell for this:

My friend and colleague, former ASPC-Eyman/SMUI Deputy Warden Carl Toersbijns, wrote the open letter below in response. Thank you Carl, for sharing this with us. I encourage everyone with someone in AZ stat prisons that they love to write him as well, and to write to Wendy Halloran and KPNX to thank them for the role their expose has played in helping bring some of the darkest abuses in AZ prisons to light.


Chad Campbell (and your own Representative) can be reached at:

Please cc KPNX and your own State Representative on that letter to Rep. Campbell.
The contact for Wendy and KPNX 12 news is:
KPNX CH12 200 E. Van Buren St., Phoenix, AZ 85004
connect@ad.gannett.com

Letters to the Arizona Republic about the need for an investigation into the violence and suicides in the prisons would help, too. Now is the time:

I just saw you the other day on television and you appeared to be enraged about what you saw in Wendy Halloran’s television report aired on Friday night. This report was just the tip of the iceberg as the Arizona Department of Corrections is infiltrated and dominated with a culture that is harmful to staff and inmates within the system. Not judging them or even casting stones at them for a most difficult job they have in running a prison system I do criticize them to the fullest my Bill of Rights give me.

I criticize them for ignoring human decency and human rights. The willful ignorance of denying a human being from being treated fair and square under the rule of law should not be an acceptable methodology to run prisons anywhere. Strangely we were all shocked at the Abu Ghraib scandal but when we reveal our own scandal here within Arizona prisons being run by the same man that was instrumental in setting up the Abu Ghraib prison mentality and culture, it is most acceptable and without a peep of outrage or disgust.

I criticize them for ignoring sound correctional practices being used throughout the United States but not inside our own prisons. It appears that the lack of statutory regulations on how a prison should be run is being left up to the discretion of one man appointed by the governor in a political situation rather than a justified and ethical one.

I criticize the legislature for allowing free rein of the prison system without oversight and levels of accountability as they encourage the cloak and dagger scenario of non-transparency and ask no question on its business.

I criticize the Governor for her hands-off attitude and letting the director destroy a good penal system single handed and decimating staff morale by implementing personnel and disciplinary policies that create low morale and high discipline unjust and unwarranted as it is politically motivated as it sits on paper.

I criticize the people of Arizona, myself included, for allowing the high number of deaths and violence [mostly gang related] to exist and not lift a hand to stop it. I am appalled by the apathy and nonchalant attitudes that prevail when we talk about prison abuse and staffing patterns that induce severe public safety issues as it creates severe gaps of safety nets once in place to control the prison systems effectively and efficiently.

I criticize and blame the lobbyist of private prisons and other entities enlisted to bring more hybrid governance with our government for the wrong reasons. Instead of saving money we are spending more. They foster and influence this mentality to lock people up for longer sentences for minor crimes to district attorneys, county prosecutors, judges, sheriffs and correctional administrators that to lock people up is good for business not realizing the money flow will stop one day.

I applaud those that stand alone in their will and refusal to join these gatherings of vultures [corrupt political leaders] that have sold their soul for a penny here and a dollar there. Their greed and lust for power, influence and control has been transferred to the director of the prison system so he can rule autonomously without following the rule of law. They are literally picking the flesh off the left behind of those that died.

This is why Arizona prisons will soon fail and explode into a revolution that will result in personal harm or death, destruction of state property and jeopardize the safety of all those communities wherein these prisons are located until the local and state law enforcement agencies can re-take control of these facilities and conduct a comprehensive and factual after-action review that will glean every detail I have just criticized.