Follow this link for the latest on the Whetstone Race Riot. 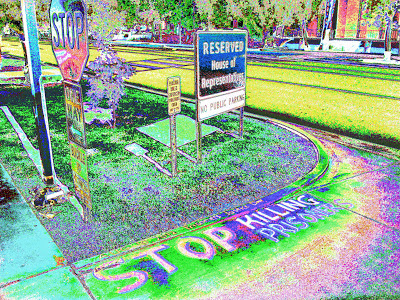 
First, don't believe everything the AZ DOC tells us this time about how it's just the prisoners being racist and violent. Remember Santa Rita? They lied about the Botulism, too.

It troubles me this happened on a minimum security yard; I hardly ever get distress letters from guys fleeing the violence or racism on lower than a 3 yard, so any insight folks may have out there would be welcome.

The only word I have so far is that jobs were moved to Catalina a few months back, plunging people into more desperate poverty and idleness - driving up the drug trade, and causing a lot of guys to get chased off the yard over bad debts... that stuff follows you every yard you land on now, by the way, thanks to cell phones. They really will kill you over $80 if you mess with the wrong people.

I also hear that it's not uncommon for gangs to hit prisoners of their own race who they've put a green light on for one reason or another by causing a "racial" distraction elsewhere on the yard so the assailant has a better chance of taking cover and their victim looks like one of the victims of the brawl. At least, that's what some prisoners have said.

Some prisoners also believe that some recent homicides have been staged to look like suicides - which is actually true since Chuck Ryan took over the DOC, according to the state's own records.

Anyway, if you know someone on this yard at ASPC-Tucson/ Whetstone, please find out what happened so I can post a narrative other than the state's, which minimizes it's own role in causing such uprisings, and only knows how to answer resistance and disorder with its own violence - and more cages and chains.

An Arizona prison complex remains on lockdown after a fight broke out among 400 inmates.

State Department of Corrections spokesman Bill Lamoreaux says the staff quickly stopped the fight that broke out Sunday morning at a minimum-security unit of the Arizona State Prison Complex in Tucson.

The prison is investigating the cause of the fight, which broke out in the Whetstone Unit. Nearly 1,250 prisoners are housed in that unit, which is one of eight at the prison.

Prison officials cancelled visitations for the day to the entire prison after the fight. 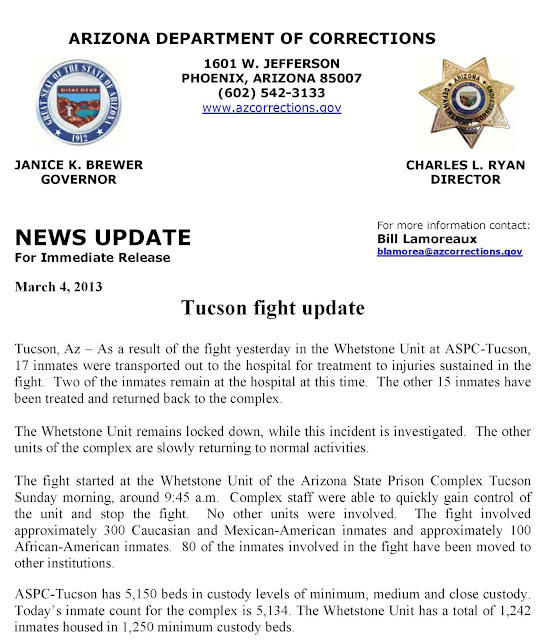 Posted by Margaret Jean Plews at 3:00 AM