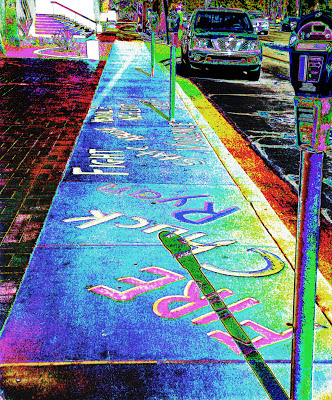 Since that little "fight" broke out at the AZ Department of Corrections' Tucson prison on the Whetstone unit last Sunday, I've heard a bit about what's been going on there from several sources, all of whom are afraid to be identified, understandably. Here's the best I can piece together about the riot - which was indeed a race riot, from what I'm told.

Whetstone is a level 2, minimum security yard, rife with drugs. It's apparently full of a lot of prisoners with mental health issues who aren't getting appropriately treated, and are consequently self-medicating - being provided with their drugs by the dealers and gangs instead of the mental health or medical staff. No "recovering" addict there has much of a chance of staying clean, either, as the supply of drugs like heroin is so plentiful and there's hardly anything going on in the way of jobs, programming, mental health or substance abuse treatment programs. 1200 men just roam the yards, then, over which a pervasive sense of boredom and restlessness hangs, driving the sane to use drugs as well. Too many AZ prisoners are being released with addictions these days that they didn't have when they were sentenced to the DOC's "care".

The medical services on Whetstone, which one person I spoke to describes as a "medical yard", are reportedly worse than negligent, and even dampens morale further. So is the deliberate indifference shown by guards to the vulnerability of prisoners they keep forcing into harms way onto general population yards despite them begging for protection from all the violence and extortion - many of those particular prisoners are the ones who appear to be mentally disabled in some way, which makes it harder for them to safely navigate the politics of prison life.

I suspect the DOC gets those kinds of "troublemakers" (the SMI prisoners who refuse to go into GP dorms or yards out of fear) off of Whetstone by disciplining them repeatedly for "refusing to house" and re-classing them all the way up to maximum security and sent to SMUI (where they must be chained and caged 24/7 because they are the worst of the worst, of course. Besides, if we didn't already have our current Supermax prison full of them, how would we justify building that new one at ASPC-Lewis that Governor Brewer wants?)

Whetstone society  is definitely organized by race, there appears to be no getting around that much - that's pretty much the rule across the AZ DOC's men's prisons. If you're a white guy and you step out of line - which means violating their rules and codes, not the DOC's - the white guys will check you  (or smash or kill you, depending more on how vicious the guy is that takes your punishment upon himself than on how serious your offense may have been). The same goes for the Black guys, Native American prisoners, and the Latinos - everyone checks their own.

I get a lot of mail from guys across the DOC system seeking help getting protective segregation due to threats or assaults from members of their own race, region, or ethnic or tribal group, but the only time I hear much about cross-racial violence is when there's a big fight or a riot like the one here at Whetstone, the one in September at ASPC-Tucson/Santa Rita, and the beat down of several black prisoners by about 100 white guys while MTC guards looked on in May 2010 at ASP-Kingman...

Hmm. See how these "fights" and "disturbances" keep getting bigger and more violent, the longer Director Ryan has been in office? What is he doing about the racial violence, I wonder, other than try to build more prisons to spread the same problems to?

One witness said the Whetstone riot actually started soon after 8am as a small fight between a few of the Black guys and Latinos "over the disrespect" one group showed the other the night before  - it just wasn't contained right away, and was allowed to rage on and spread until late morning. It's my understanding that the officers on Whetstone were actually "warned that the yard was going to pop off if they didn't get those black guys out of there" before there was any fighting. But they didn't take heed, and thus that AM the two groups came into conflict - after which the white guys all jumped in. It's a miracle no one ended up dead.

I'm told that the Black prisoners took the brunt of the beatings, as well as the looting that went on of the dorms during and after the unchecked melee - they got all their stuff trashed and stolen, while they themselves got zip-tied and locked down in the visitation areas all day. Some folks I've heard from are really concerned that the DW or warden there seems determined to re-integrate almost all the same prisoners on that yard to show that she's regained control that way - but this riot involved estimates of up to 700 guys (400 was reported by the DOC) actively fighting with not only fists, but also with tools and other improvised weapons for a prolonged period.

That tells me that no one at the DOC had control of that yard from the get go - the prisoners have been running it all along (the leaders handling the gambling, drugs and extortion rackets, not the ones who would help their comrades sue for their health care rights or anything. If those guys were running the place, prison might actually end up rehabilitating some people....)

That's all for now - let me know if anyone out there has more info, though, or different insights. I hope this at least gives the feds and media something more to go on - there's real trouble brewing in AZ prions these days, and if there isn't some meaningful response to the institutional dehumanization, the profound boredom and despair, and the need for mental health and substance abuse treatment, the violence  - racial and otherwise - will only get worse.

AZ DOC Director Ryan doesn't need more prisons and more protective segregation yards - he needs to  insert non-violence training into the prisons - along with rehabilitative programming - and respond meaningfully to all the grievances prisoners have. Arizona also needs to expedite bringing our low-risk prisoners back home to our communities and offering them a life after felonization that they can actually build on - not one which drives them into dead end jobs and high risk housing (if they're lucky to get that much once they get out of prison).

In the meantime, Arizona's Superior Court Judges need to listen up - PLEASE stop sending vulnerable and mentally ill people to prison thinking you're doing them the favor of putting them where they'll get medical and mental health care, substance abuse treatment, job training, or anything else but raped or beaten or left outside in a cage to die in this state. Be a little more creative and compassionate instead, and stop draining our communities of the resources we need to educate our kids, tend to our our ill and disabled, and prevent crime and victimization in the first place.
Posted by Margaret Jean Plews at 5:01 PM