Walshe: The ordeal of being gay in prison.

I've been hearing from queer prisoners under attack at the AZ Department of Corrections lately, and will have some excerpts form their letters in the weeks to come as I struggle to get at least one of them into protective custody before he gets hurt. In the meantime, this brief article is a good way to open the discussion - I've been impressed with how hard Sadhbh Walshe has worked on exposing human rights violations in our prisons this past year. Check out her other work at the Guardian... 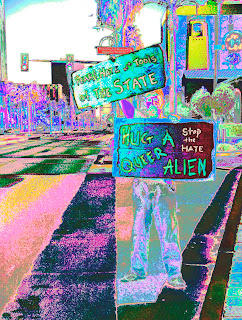 The grim truth of being gay in prison.
Sadhbh Walshe
March 7, 2012

In 1984, when Calvin Burdine was awaiting sentencing for allegedly stabbing his gay lover to death, the prosecuting attorney encouraged the jury in his closing remarks to award Burdine the death penalty, rather than life in prison, on the grounds that sending a gay man to prison was akin to sending a kid to a candy store. After 17 minutes of deliberation, the jury obliged and sentenced Burdine to die. His death sentence was later overturned (mostly because Burdine's public defender had slept through much of his trial), but the homophobic thinking – that prison is some kind of paradise for gay men – lingers on.

The reality of life in prison for homosexuals and transgender individuals does not appear to reflect this myth. One young man named Rodney, imprisoned for fraud and check-forging, sent me a detailed account of his life so far in prison. He described a litany of brutal rapes, assaults, beatings and, eventually, the total abandonment of his male identity as his only means of survival in the hyper-masculine and often homophobic prison environment. His account suggests that far from being a paradise, prison for gay men can be a living hell.

Within days of his first entering prison, the 23-year-old Rodney claimed he was the victim of three separate sexual assaults, involving five different inmates. The prison he was first sent to did actually have a separate tier for gay inmates, but according to Rodney, because he did not "appear overly effeminate" during his classification, he was placed with the general population; and because it was supposedly rare to have a gay person slip through the cracks of the system, his fellow inmates took full advantage.

"My first week or so in general population was hell on earth. Physical, mental and emotional torture. After being raped, I performed acts by request. It was understood and expected. I had no means to protect myself, being only 23 and scared for my life.

"I dared not report anything because I was clearly warned that my life would be in jeopardy should I do so. I quickly learned that a snitch is a worse label than a fag.

"Against popular opinion, jail is not heaven for a homosexual. Nothing is heaven about being intimidated into performing sexual acts. It is also rape, just like the three forcible rapes were.

"True enough, I am attracted to men and always have been, but in life [outside], it's my choice whom I share a bed with; it's intimate and personal. Having my mouth and anus aggressively penetrated by several strangers is anything but."


He went on to report how one of his rapists took a fancy to him and "purchased" him from the tier rep for $20. Even though he was thereby essentially enslaved by his new "prison husband", he was grateful – because his days of "being the communal bitch were over". He said he tried to do whatever his prison husband wanted or needed, including cleaning his cell, washing his clothes, preparing his food, and whatever else his "husband" wanted or needed, including, of course, being available for sex – because "he did what I wanted and needed – kept other inmates off me."

As time wore on and "husbands" came and went, Rodney perfected the art of being a "prison ho", as his only means of surviving intact. This involved establishing a female name and identity, learning how to speak when spoken to, "respect his man" and emasculating himself to the point where he could not stand while urinating. There is nothing about the experience that could be considered enjoyable.

"I've heard before that 'jail is a faggot's dream.' I assure you that cliché is not the case. Gay men who do not attempt to hide their sexuality are forced into passive and submissive roles. To live with some standard of equality, we have to trade in our manhood. We are completely emasculated. It's a form of technical castration. The role of woman is forced upon us and any rebuttal is considered a sign of disrespect. My way of thinking about myself and my sexuality has been permanently altered."


It's difficult to assess how typical Rodney's prison experience is, but numerous studies conducted by the Bureau of Justice Statistics, based on anonymous inmate surveys, have shown that gay and transgender inmates are among the most targeted groups for sexual victimization. Until fairly recently, little has been done to help them. Just Detention International (JDI), an organization whose aim is to eradicate prison rape (pdf), is trying to change that.

JDI has been working with the California Department of Corrections and Rehabilitation (CDCR) to establish "sensitive needs yards" (pdf), where gay, transgender and other vulnerable inmates can serve out their time in safety. Several prisons operated by the CDCR have now established sensitive needs yard with some success, and the JDI is hoping that other states will adopt this model.

In the meantime, prisoners like Rodney have been forced to make their peace with their "prison ho" fate.


"I've grown to realize that I am a man and being a prison ho is an act."

It is not, however, an act that Rodney or any other inmate should be forced to perform.

Posted by Margaret Jean Plews at 11:25 AM