AZ Republic: Ignore the prisons at our own peril... 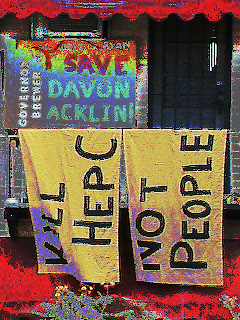 
Excellent editorial from the folks at the AZ Republic. They've been doing a great job covering the prisons this past year - which takes a lot of courage for mainstream media to do  in this town.


This exposure incident is potentially devastating for those men affected - up to 20% will likely die from liver cancer or cirrhosis as a result, if they don't get successfully treated. Hep C is epidemic in our state prisons already, though -that incident was a drop in the bucket compared to the 12,000 already infected (almost 6,000 confirmed cases alone, compared to less than 200 with HIV/AIDS...it's pretty bad).

As long as they aren't treating addictions inside or doing an aggressive harm reduction campaign, though, the disease will continue to be spread by needles among IV users and tattoo recipients - 95% of whom ultimately return to the community, becoming a serious public health concern. One of the things that could do most to reduce the incidence and impact of Hep C in the community is to provide adequate substance abuse treatment and Hep C education, screening and treatment in prison, but neither is really happening.

According to the DOC 75% of prisoners are coming in with serious substance abuse issues, yet they aren't providing substance abuse treatment for more than 4% of the total prison population in a year - not even for all those guys being sent off to DUI prison, where everyone thinks we pay for a special treatment setting so they don't relapse and kill someone on the road next time. Coming into the mess we already have in the DOC medical system, I don't see how Wexford is going to do any better by prisoners - especially those with Hep C - AND turn a profit.

Out of sight, out of mind

On Aug. 27, a nurse working for a company called Wexford Health Sources Inc. administered a dose of insulin to a diabetic patient who has hepatitis C, a deadly and extremely infectious liver disease.

The nurse then inserted the needle into another vial of insulin to draw still more of the drug for the patient.

She put that second vial, and the remainder of its contents, onto a shelf with other vials of insulin.

You can well imagine where this health-horror story is going: More than 100 other diabetes patients who later were given insulin treatments may have been infected with hepatitis C.

Mistakes happen. Including potentially tragic ones like this. But there is a bit more to this story.

Wexford is a private company that just this spring won a $349 million, three-year contract to provide health services to Arizona's nearly 40,000 prison inmates. The nurse, who already was under investigation for providing slipshod care, worked for Wexford at the Arizona state prison at Buckeye.

State rules require health-care providers, including those working out of prisons, to alert county and state health authorities about a potential outbreak of an infectious disease within five business days.

Wexford alerted public health officials of the incident on Sept. 4, more than a week afterward -- and only after Wendy Halloran of 12 News learned what happened from an inmate's family and The Republic's Craig Harris broke the story online.

In Arizona's seemingly inexorable march toward privatizing ever more of its prison system, this incident is but one more red flag about the pitfalls of that policy.

Sure, it was an accident. Accidents happen. But are more such accidents occurring at prisons whose profit motives tempt supervisors to cut corners?

Corner-cutting appears to have been a factor in the escape of three prisoners on July 30, 2010, from a Kingman prison operated by Management & Training Corp. A faulty alarm system appears to have contributed to the incident, during which the escapees murdered a New Mexico couple.

Another private contractor hired by Arizona, GEO Group Inc., has lost at least 27 of its prisoners around the country since 2004, including one from a facility in Florence, albeit from mostly low-security facilities.

The Wexford incident, however, raises a still more unsettling concern: Are there more accidents and incidents than we know about? Is Wexford's slow-mo reaction to following established protocol evidence of other incidents being swept under the rug?

The state Legislature's most ardent Republican critic of private prisons, Mesa Rep. Cecil Ash, argues that private prisons "are the wrong business model" for exactly that reason: "They are out of sight, out of mind."

If private-prison operations were cheaper to operate, that might mitigate the more minor operational concerns. But they are nearly 10 percent more expensive to operate. Lawmakers like them because of the up-front cost savings on construction, which the private firms often bear.

Legislators need to take this Wexford incident for what it is: stark evidence that transparency is a serious issue with private prisons.

Prisons are out of sight, out of mind, at our peril.
Posted by Margaret Jean Plews at 5:59 AM