Remembering the suicide victims of Jan Brewer
and Charles Ryan at the Arizona Department of Corrections. 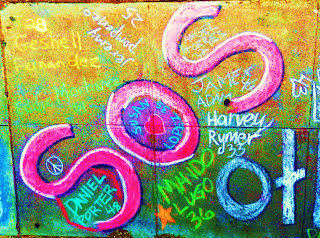 
This is the state of suicide prevention in Arizona's Department of Corrections, under Director Charles Ryan. I hope the DOC responds to this critique with a detailed description of what else they're doing to reduce the rate of despair and violence that's driving Arizona prisoners to kill themselves at twice the rate than the national average for state prisoners. I want to know what the training consists of. So do the families who have already suffered a death in custody - as well as the loved ones of those mentally ill prisoners fighting to be safe and well in custody now. How have the conditions described below changed since Parsons v Ryan was filed?

If you have a loved one in prison with a serious mental illness whose safety or sanity you fear deeply for, please feel free to contact me. I'm just an artist and activist - I'm not a lawyer or professional anything, but I can refer you to resources in your community, and connect you with other families who share your struggle.

Have your loved ones write me as well.


thank you again to all the attorneys working on this case...but most of all, to the prisoner-litigants who had the courage to put their names and faces to the abuses and neglect going on behind bars in this state...

82. Defendants have a policy and practice of housing prisoners with serious mental health needs in unsafe conditions that heighten their risk of suicide. In FY 2011, there were 13 suicides in ADC prisons, out of a population that averaged 34,000 during that time. That is a rate of 38 suicides per 100,000 prisoners per year, more than double the national average suicide rate in state prisons of 16.67 per 100,000. Three prisoners committed suicide in one week in late January 2012, including a 19-year-old woman.

83. One factor responsible for such a high suicide rate is Defendants’ policy and practice of maintaining suicide watch facilities that offer no meaningful treatment. Usually the only people who interact with prisoners on suicide watch are correctional officers who check on them periodically, medication assistants who dispense pills, or psychology assistants who talk to them through the front of their cell. Plaintiff Swartz did not receive psychotherapy for more than two months in the summer of 2011 while on suicide watch at the Lewis facility. After he swallowed glass and was taken to an outside hospital, the hospital psychiatrist recommended that he be taken to an inpatient mental health unit. These units are in the Phoenix complex. Instead, Mr. Swartz remained at Lewis where he continued to harm himself. He finally was moved to the Phoenix inpatient unit almost three months after the hospital psychiatrist had made that recommendation, but after a short period of time he was again returned to Lewis. Plaintiff Thomas did not see a psychiatrist for 11 months despite being placed on suicide watch multiple times.

84. Defendants also have a policy and practice of holding suicidal and mentally ill prisoners in conditions that violate all notions of minimally adequate mental health care and basic human dignity, and are not compatible with civilized standards of humanity and decency. Suicide watch cells are often filthy, with walls and food slots smeared with other prisoners’ blood and feces, reeking of human waste. Mental health staff show a lackof professionalism and little compassion for prisoners enduring these conditions: for example, prisoners in suicide cells are taunted for being in “the feces cells.” When Plaintiff Swartz complained to a LPN about the unhygienic conditions of the suicide cell at Lewis, the LPN described him in the mental health notes from the encounter as “bitching about cleanliness – germs and disease.”

85. Defendants have a policy and practice of keeping suicide watch cells at very cold temperatures. Prisoners are stripped of all clothing and given only a stiff suicide smock and a thin blanket, making the extreme cold even harder to tolerate. Plaintiffs Rodriguez and Verduzco report that the suicide smock used in Perryville barely comes to the top of female prisoners’ thighs, so both their legs and arms are exposed to cold air. Many prisoners are also deprived of mattresses and as a result must sleep on bare steel bed frames, or on the floor made filthy with the bodily fluids of prior inhabitants. Plaintiff Brislan spent several weeks in a frigid suicide cell with no mattress.

86. Defendants have a policy and practice of exposing prisoners on suicide watch to gratuitously harsh, degrading, and damaging conditions of confinement. Prisoners are given only two cold meals a day, and are denied the opportunity to go outside, brush their teeth, or take showers. The only monitoring prisoners receive in suicide watch is when correctional officers force them awake every ten to 30 minutes, around the clock, ostensibly to check on their safety. In some suicide cells, bright lights are left on 24 hours a day. The resulting inability to sleep aggravates the prisoners’ psychological distress.

87. Mentally ill prisoners on suicide watch complain of correctional staff behavior that interferes with any therapeutic effect of being on suicide watch, including harassment, insults and taunts, and the excessive and practically sporting use of pepper spray. Prisoners at the Perryville suicide watch units, including Plaintiff Verduzco, have jerked awake when awoken by staff on the “safety checks,” and are pepper sprayed for allegedly attempting to assault the officers. Guards in the Perryville suicide watch units also frequently pepper spray female prisoners in their eyes and throats when they are delusional or hallucinating. Plaintiffs Rodriguez and Verduzco have asthma and rely upon inhalers, and they have had asthma attacks from the regular use of pepper spray in the women’s suicide watch unit. On multiple occasions after she was pepper sprayed in the eyes, nose, and mouth, Ms. Verduzco was dragged to a shower, stripped naked, and sprayed with extremely cold water to rinse away the pepper spray; she was then left naked to wait for a new vest and blanket. A prisoner in the Florence prison’s suicide watch unit reports that while there he was handed razor blades to swallow by other prisoners, and told “just die right away.” He started to swallow the blades, and security staff pepper sprayed him while he coughed up blood, and did not provide other emergency response.

88. Defendants’ policy and practice of holding suicidal prisoners in excessively harsh conditions does not prevent but rather promotes self-injurious behavior. Plaintiff Brislan has cut himself numerous times with razors and pieces of metal while on suicide watch at multiple prisons, including Tucson, Lewis, and Eyman’s SMU 1 and Browning units. At the Tucson prison, staff put him on suicide watch in a cell with broken glass on the floor which he used to cut himself. During another stay in suicide watch, Mr. Brislan was given a razor blade that he used to deeply lacerate both of his thighs. While on suicide watch in the Lewis prison during the summer of 2011, Plaintiff Swartz, on separate occasions, swallowed multiple foreign objects, including two large staples, plastic wrap, a piece of glass, a lead-head concrete nail, a spork, two pens, sharpened paper clips, a metal spring, a steel bolt, and two copper wires. As with Plaintiff Brislan, Mr. Swartz’s repeated suicidal gestures and ability to access dangerous objects while on suicide watch confirms that he was not being properly monitored and that any mental health treatment he might have been receiving was inadequate.

89. Defendants also have a policy and practice of improperly using the suicide watch cells to punish prisoners for alleged disciplinary infractions. An Eyman prisoner who went on a hunger strike to protest prison policies, but did not display signs of mental illness or distress, was put in a suicide watch cell for several weeks and was told by a mental health provider, “If you weren’t on this hunger strike, you wouldn’t have to live in the feces cell.”
Posted by Margaret Jean Plews at 6:30 AM