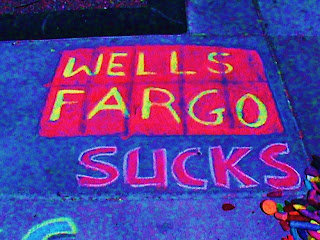 Rawstory.com
By Eric W. Dolan
Thursday, November 10, 2011
The advocacy group Small Business United on Thursday called on Wells Fargo to provide a full accounting of investments related to private prisons and immigrant detention centers.
Wells Fargo is one of the largest investors in Geo Group, Inc. — the second largest private prison company in the world contracted by state and federal government agencies. The group spends millions lobbying for stricter immigration enforcement.
Wells Fargo has claimed the investments in the GEO Group were made by Wells Fargo mutual funds on behalf of clients, not investments made by Wells Fargo and Company.
“We demand transparency,” said Marco Reinoso, owner of Superstar Deli for 26 years and resident of Brooklyn. “I pay my fair share of taxes and deserve to know where the dark money trail leads, and whether our money is being used to further anti-immigrant bills that hurt our economy and lead to many in our community being treated with violence and inhumanity in these detention centers.”
For-profit prisons are associated with heightened levels of violence toward prisoners and have limited incentives to reduce future crime, according to a report by the American Civil Liberties Union.
“The perverse incentives to maximize profits and cut corners — even at the expense of safety and decent conditions — may contribute to an unacceptable level of danger in private prisons,” the report stated.
After spending a month in solitary confinement in a GEO Group operated Texas prison, 32-year-old Jesus Manuel Galindo allegedly died of an epileptic seizure in December 2008. The cell lacked an operational intercom, which would have allowed Galindo — who needed regular medical attention — to call for help. The neurologist who reviewed Galindo’s autopsy said he was “set up to die.”
In another incident, former GEO Group employees working for the Texas Youth Commission failed to report horrid conditions at a GEO-operated prison in Texas. An independent report found the bug-infested prison smelled of feces and urine, had numerous water leaks and racially segregated the young inmates.
“Prisons have turned into a business for the rich,” said Esmeralda Valencia, owner of Esmeralda Restaurant in Brooklyn, NY. “Wells Fargo should not be investing our hard earned dollars to make profits off of the most vulnerable members of our society. Instead, they should be working to resolve this economic crisis and support immigrant neighborhoods.”
Posted by Margaret Jean Plews at 10:59 PM