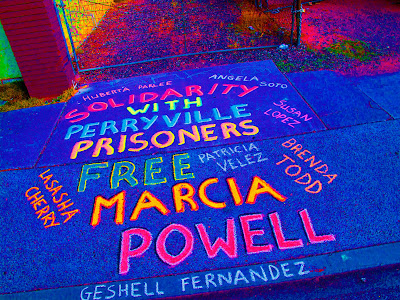 Some of the women prisoners who have died from suicide and/or gross neglect
under the current administration, since January 2009.
Memorial at appx. 1017 N. 1st Street, Phoenix AZ
(November 18, 2011)

On Tuesday, November 22, in Senate Hearing Room 1 there will be a hearing on the Sunset Review conducted by the Arizona Auditor General on the Arizona Department of Corrections (ADC). This is the third in a three part series of reports on the ADC. The links to the reports are below:

Department of Corrections—Oversight of Security Operations (September 2011, Report No. 11-07)

The most recent report covering sunset factors addresses whether or not the ADC is meeting the needs of the public or should be dissolved. Of course, the department is not about to be dissolved. The report contains some fascinating information about how different departments are staffed and what mandates the ADC is expected to follow on everything from assuring fair pricing schedules for prisoners purchasing from prison stores/concessions to the recommendation that the ADC assures that the privatization of services yields a cost-benefit to the state without compromising on public safety, as noted here on page 21:


"Going forward, potential privatization areas should be carefully evaluated to ensure the benefits of contracting outweigh the costs. Information from the other states auditors interviewed point to the importance of evaluating the costeffectiveness of privatizing a service or function versus performing the service or function in house. For example, a North Carolina official indicated that the state no longer contracts for prison maintenance or private prison beds largely because it cost more to contract for these services than for its corrections department to perform them. Security issues were also a factor in eliminating North Carolina’s contract for private prison beds. Similarly, the September 2010 Office of the Auditor General report on prison population growth recommended that the Legislature consider directing the Department to further study and analyze the costs for the State to build and operate prisons compared to contracting with private prisons to determine which option would be more cost-effective while still ensuring public safety (see Report No 10-08)."


Presently, the ADC is being sued (see statement from the ASPC-Tucson on this matter) to assure it completes an investigation and report demonstrating that the proposals to privatize 5,000 new prison beds would in fact save the state money before awarding those contracts - though they have delayed the decision to award private prison contracts until at least December 22, 2011.


Prior ADC studies comparing the cost of state-run vs privately run prisons show that private prisons actually cost more to operate - and that's not even considering the cost of the security lapses that allowed three prisoners to escape from ASP-Kingman in August 2010. The cost of that private prison failure included an extensive, nationwide manhunt and the lives of an elderly couple. Unbelievably, despite the escape, Arizona was expected to pay MTC, the prison operator, for it's empty beds in the aftermath.


Also of interest in the report is the re-assertion of the mission of the AZ Department of Corrections:

"The Department’s statutory purpose is to serve as the correctional program for the State and to provide staff and administration relating to the institutionalization, rehabilitation, and community supervision functions of all adult offenders. Consistent with its statutory purpose, the Department’s mission is “to serve and protect the people of Arizona by securely incarcerating convicted felons, by providing structured programming designed to support inmate accountability and successful community reintegration, and by providing effective supervision for those offenders conditionally released from prison.”"


The Department has five goals in carrying out this mission:


•" To maintain effective custody and control over inmates in an environment that is safe, secure, and humane.
• To require inmate participation in self-improvement programming opportunities and services, including work, education, substance abuse treatment, sex offender treatment, and spiritual access designed to prepare inmates to be responsible citizens upon release.
• To provide cost-effective constitutionally mandated correctional healthcare.
• To maintain effective community supervision of offenders, facilitate their successful transition from prison to the community, and return offenders when necessary to prison to protect the public.
• To provide leadership direction, resource management, and support for department employees to enable the Department to serve and protect the people of the State of Arizona and to provide comprehensive victim services and victim–focused restorative justice programs that hold offenders accountable."

I do not see that the Auditor General has evaluated how "safe" or "humane" the environment is in which prisoners are kept, or how well the department's medical care meets constitutional guidelines. In fact, the suicide rate under the current administration has doubled, and assaults and homicides have skyrocketed - suggesting that the most fortified and well-funded law enforcement agency in this state can't keep their own prisoners safe. The ACLU National Prison Project and the Prison Law Office have been investigating the ADC and are also poised to sue the state over serious deficiencies in the ADC's medical and mental health care, which fails to meet constitutional standards of care.

Furthermore, when Ryan took over, many of the prisoner's rehabilitative programs were eliminated - including one that trained prisoners to be suicide prevention aides. A number of those that were eliminated were prisoner-run and low-cost. Nothing suggests that the ADC's remaining programs and policies are currently modeled to be consistent with evidence-based practice in the field of corrections - which would yield far better outcomes in re: both staff and prisoner safety, the culture of the prisons, and actual rehabilitation and recidivism rates.

Rather, major decisions appear to be made based on the director's personal biases (which are hostile to prisoners, their families, and prisoner-run programs as evidenced by new fees for medical care and visitation approval, gouging of families for phone calls, resistance to early-release programs or sentencing reform, and elimination of effective and empowering rehabilitative programming). Director Ryan justifies his actions by perpetuating propaganda and public myths such as privatization saves money, that early release would compromise public safety because the vast majority of AZ prisoners are repeat and violent offenders (even though over 15,000 prisoners are so "safe" that they're rated as minimum security), that the ADC provides meaningful rehabilitation programs, and that lower crime rates depend on maintaining high incarceration rates (which they do not).

The AZ Auditor General's office appears to give the ADC a passing grade, nonetheless, and - not surprisingly - doesn't call for the department's dissolution. In light of the horrendous lack of medical and psychiatric care for prisoners, and in the wake of highly preventable suicides, grisly homicides, and escalating overall violence under his watch, however, there remains a huge call in the community for Director Chuck Ryan to be removed from his post or step down... and those particular calls are coming from people who have worked for him.


Anyone wishing to echo a demand for Ryan's resignation or to submit complaints about the way our billion dollars are being spent by the AZ Department of Corrections should contact Governor Brewer's office here or by snail mail here:

Please cc all copies of correspondence on the matter to myself , Peggy Plews (arizonaprisonwatch@gmail.com), or to AZ Republic reporter Bob Ortega by email at: bob.ortega@arizonarepublic.com. He can also be reached via snail mail at:

Citizens may order full printed copies of the 2011 Auditor General's Reports on the Department of Corrections from:

Please include your complete return address as well as the report name and number you are requesting.

All reports are also available from the Arizona Department of Library, Archives and Public Records.

Posted by Margaret Jean Plews at 5:37 AM