The Big Business of Inhumane Detention of Immigrants 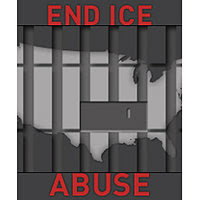 The Department of Homeland Security assumes that mass detention is the key to immigration enforcement. But in fact, our detention system locks up thousands of immigrants unnecessarily every year, exposing detainees to brutal and inhumane conditions of confinement at massive costs to American taxpayers. Throughout the next two weeks, check back daily for posts about the costs of immigration detention, both human and fiscal, and what needs to be done to ensure fair and humane policy.

The inhumane and abusive system that is immigration detention in this country is good business for one particular special interest group — the private prison industry.

According to some estimates, nearly 50 percent of the tens of thousands of immigrants in detention every day are locked up in jails and detention systems operated by private prison companies — a reality that crystallizes the private prison industry's deep financial incentive to see the continued expansion of a system that this blog series has made clear is riddled with myriad abuses.

An ACLU report examining the destructive impact of prison privatization, to be publicly released tomorrow by the National Prison Project, outlines the nefarious connection between the for-profit private prison industry and the expansion during the last decade of immigration detention.

It's clear that executives in the private prison industry have achieved gigantic profits on the backs of immigration detainees left vulnerable to sexual abuse and even death.

As the report makes clear, private prisons have profited not only from needlessly harsh sentencing policies but also from an unprecedented increase in the number of detained immigrants. In 1994, the average daily population of detained immigrants stood at 6,785. By 2001, the number of immigrants detained at any given time had more than tripled, to 20,429. By 2010, fueled to a significant degree by a post-9/11 increase in reliance on immigration detention, that number stood at 31,020 — an eye-popping 450 percent increase over 1994 levels.

Why? Well at least a part of the answer was provided by National Public Radio, which reported in a 2010 story that the private prison industry engaged in a "quiet, behind-the-scenes effort to help draft and pass Arizona Senate Bill 1070," the infamous statute that requires police officers in Arizona to ask people for their papers during law enforcement stops based only on an undefined "reasonable suspicion" that they are in the country unlawfully.

Senate Bill 1070, and similar "copycat" laws since enacted in several other states, have the potential to further increase the number of immigrants detained, thereby adding pressure to build more immigration detention centers — and put even more cash into the pockets of private prison fat cats.

It's a nasty business, indeed.

Posted by Margaret Jean Plews at 8:34 AM