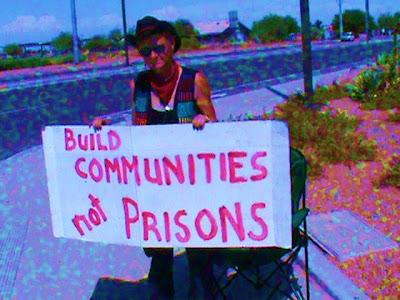 
The Arizona Department of Corrections conducted five public hearings regarding contracts for 5,000 beds in private, for-profit prisons. The last hearing was in Coolidge on 18 August at the City Council Chambers. I drove down from Phoenix through a sandstorm and got a good car wash as it poured rain during the hearing. Close to 200 people packed the auditorium in a sea of blue tee shirts saying “Coolidge: The right choice.” People of color were noticeably absent.

As with the hearing I attended in Goodyear on the 10th, the director of DOC, Chuck Ryan, began promptly on time and outlined the legislative action authorizing the 5,000 new beds and the process for DOC. It became apparent during the testimony that talks have been ongoing in Coolidge since early 2010.

The representative from MTC was given an hour for his presentation. He talked about “A Partnership for the Future” and the BIONIC (believe it or not I care) culture of MTC. The presentation focused on the job corp and international charity work rather than the reality of the prison facilities they already mismanage. This approach was clearly designed to mislead the audience into thinking they were some kind of charitable organization rather than the bottom-feeders they are.

They bragged about their record in Arizona in spite of the disaster in Kingman and the result that they never learned their lesson as they sued the State when the state tried to make them correct the security errors and got nearly $3 million of taxpayer dollars from that. For trying to be held accountable for letting killers escape and to clean up their act. Clearly no lesson was learned.

Rather than take their entire hour, they paraded an array of officials to the podium to sing their praises. The mayors of Coolidge and Marana, the sheriff and the chief of police, members of the board of supervisors, members of the school board, members of the city council, the Chamber of Commerce all marching in lock step.

Thirty-seven speakers followed the presentations. The first two speakers took the wind out of their sails. Vivian Haas and her son-in-law Frank Rook (not sure of spellings) are the family of the couple that was murdered by the inmates who escaped from Kingman. They told the tale of MTC’s mismanagement, incompetence and inhumanity in the wake of the murders. While they had no position on profit v. state prisons, they focused on safety and strongly urged not to reward MTC with any contracts.

Of course other speakers talked about how wonderful MTC was including some employees shipped in from Kingman. As with other hearings, the need for jobs eclipsed every other thought about the real impact of the prison. The college spoke of having an educated work force and being able to educate the staff. Students in the law enforcement program told how eager they were for jobs.

I spoke for NAACP opposing the prison for four main reasons: cost, safety, mismanagement and the inhumanity of for-profit prisons. Several speakers illustrated the debasement of our society by referring to the prisoners as good revenue sources because their presence counts for federal revenue sharing so the area would get more money. That’s like the Constitution that counted slaves as three-fifths of a person for purposes of representation. Ryan referred to “loading in the facility” when he meant sending inmates – now reduced to items of commerce – to Kingman. People are not cost centers. They are human beings with human rights.

Peggy Plews spoke about the surfeit of human rights in prisons and asked the group to form a citizens oversight committee and to be committed to human rights. I didn’t notice anyone writing down her website. Emily Verdugo a local resident and education coordinator for the Democratic Party in Pinal County spoke about the lack of vision of local leaders to seek a prison as the only industry for the town. She feared that with a prison in the city limits, education would never be funded. She pointed out that prisons are put in towns with a poorly educated populace and what was the message for Coolidge?

Susan Hower from Tubac spoke as the former head of New Jersey DOC and pointed out that MTC had made lots of promises but the reality and the research proves that such promises do not come true. Other businesses do not follow a prison and economic development does not occur. Good jobs do not materialize as often other prisons are closed and those jobs are just moved. In Bullhead City, inmates from Kingman are replacing city workers and good jobs being lost. The work is tough and the turnover very high for the low pay and high stress. She pointed out that DOC had withheld $44,000 from Kingman MTC and $54,000 from Marana MTC for failure to fill the jobs they had. Of course vacant positions mean more profit for the corporation. Lastly she pointed out the debacle in Texas where MTC left a town high and dry with an $837,000 loss after they fled the town.

The next speaker Rachael Wilson asked pointed questions about how the financing would work. After some tough cross examination, in which the MTC representative said – trust me, we have been doing this for 17 years - she established that Wall Street investors would buy the bonds and then the State of Arizona – with your tax dollars – would pay them back. Do you trust Wall Street? Do you trust MTC? The contract is only on a five-year option so MTC can bail in five years with the money and leave us stuck with the debt. Terry Stewart, former DOC head and now a shill for MTC, also tried the “trust me” route but got no better reception as the speaker pointed out it would be to the advantage of DOC to decrease prison population but to the advantage of MTC and other for-profit prisons to increase prison population. She asked the recidivism rate and DOC’s only answer was that it was 24.8% for all prisons combined – private and state – and they could not break out the numbers separately. Don’t believe it.

DOC came in for its share of criticism from Lucy Shep from Tucson for not monitoring its contracts with the private prisons. She forced DOC to admit that the law requires that every two years a comparison be done between state and private prisons and though we have had private prisons in Arizona for 17 years, one has NEVER been done. Ryan claimed one would be done by June 2012 – too late for this decision making process.

Frank Smith from the Private corrections Institute spoke and outlined the history of lies about private prisons – the failure of jobs, the low pay, the lack of benefits, the lack of economic development, the turn over, the lack of safety, and the excessive cost. He encouraged the audience, as had earlier speakers, to do their own research and not believe the fantasies told by DOC and MTC.

Roberto Reveles, president of the Board of ACLU, opposed privatization because of the mismanagement of the prisons, especially by MTC. He reiterated that they don’t save money, are not safe, focus on profit and are not accountable. No cost benefit analysis exists so there is no rationale to do this and the state is fiscally irresponsible to spend this money at this time.

You still have time to speak up. Comments are due by the end of August to: Procurement, ADOC, 1645 W. Jefferson, Phoenix, 85007. Specify in the document that you are writing about the 5,000 private prison bid RFP. Send copies of your letters to both your state representatives and your state senator and the governor.

As Dr. Martin Luther King said, “In the end, we will remember not the words of our enemies but the silence of our friends.”