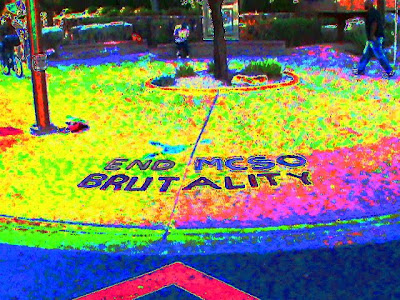 
Went to Kevin Gerster's pre-trial this AM, only to learn that he entered a plea last week to three counts: a misdemeanor for tampering with criminal records (he gave a buddy the address of a guy his ex-girlfriend was dating, and the buddy stalked and assaulted them both), as well as two aggravated assault charges for beating up his mentally ill prisoners (both are just class 6 felonies, though - charging him for assaulting "vulnerable adults", as I strongly urged the prosecutors to do, would have made it a class 2 felony).


Here's what really troubles me, though: even though he's a repeat offender of violent crimes against vulnerable persons, they let him off the hook with "non-dangerous/ non-repetitive" designations on his assaults - how can aggravated assault be "non-dangerous"???? That's real BS. It's so he can get out without a felony in the end - just probation and a misdemeanor, if he behaves (see the law below)


That favor by the prosecutor may well be what helps him avoid prison for all this. It sure minimizes his responsibility for hurting people repeatedly - the only reason he can't keep doing so is because he got caught, not because he found God or something. That's one sign of a sociopath - that and the sheer absence of a conscience.


This is all so disappointing - I really thought Prichard and her boss Bill Montgomery had what it took to really get justice in this case. That guy's going to walk with probation and community service, no doubt - despite violating all of our trust, as well as the welfare of his prisoners. God only knows how traumatized his victims still are - they'd have every reason to be afraid of the uniform of the state, now, too - as do the rest of us.


Here's Gerster's sentencing date; be there if you can:

Look for this provision to be pulled out at sentencing, so he has a chance of getting out of there without any felony charges at all (and could therefore become a rent-a-cop at your local high school or mall) .

Shame on the MCAO for not prosecuting him for abusing vulnerable adults... and this plea they gave him is hardly justice for those of us who were victimized by the breaking of our trust - on our dime - much less for the guy whose jaw he broke.

A. Notwithstanding any other provision of this title, if a person is convicted of any class 6 felony not involving a dangerous offense and if the court, having regard to the nature and circumstances of the crime and to the history and character of the defendant, is of the opinion that it would be unduly harsh to sentence the defendant for a felony, the court may enter judgment of conviction for a class 1 misdemeanor and make disposition accordingly or may place the defendant on probation in accordance with chapter 9 of this title and refrain from designating the offense as a felony or misdemeanor until the probation is terminated. The offense shall be treated as a felony for all purposes until such time as the court may actually enter an order designating the offense a misdemeanor. This subsection does not apply to any person who stands convicted of a class 6 felony and who has previously been convicted of two or more felonies.

B. If a crime or public offense is punishable in the discretion of the court by a sentence as a class 6 felony or a class 1 misdemeanor, the offense shall be deemed a misdemeanor if the prosecuting attorney files any of the following:

1. An information in superior court designating the offense as a misdemeanor.

2. A complaint in justice court or municipal court designating the offense as a misdemeanor within the jurisdiction of the respective court.

3. A complaint, with the consent of the defendant, before or during the preliminary hearing amending the complaint to charge a misdemeanor.

Posted by Margaret Jean Plews at 10:31 AM