If you knew how many Indigenous people we were imprisoning these days - many far from their homes - you'd know why it's so important to the fight for prison abolition to respect sacred places...their struggle for Indigenous rights, free exercise of religion, and to defend Mother Earth - without being marginalized or branded as eco-terrorists in the process - is also ours. We must stand in solidarity with them before they are imprisoned... 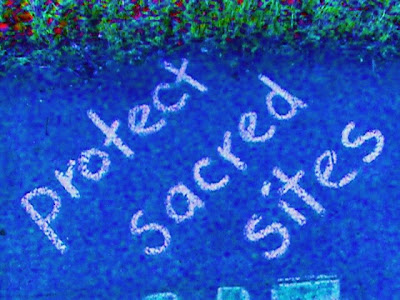 As asked by one defender of the San Francisco Peaks last week: How can the Dine' and other Indigenous peoples be trespassers on their own Holy Land?


Join us in Phoenix on Friday, June 24 at 7:30am to stand in solidarity with Indigenous resistance to the destruction and desecration of the Sacred: Demand that Arizona Department of Environmental Quality Change its Permission Allowing Wastewater to be Used for Snowmaking.


On Thursday, June 16th six people were arrested for halting the construction of a water line, which would pump Flagstaff waste-water up to Snowbowl on the sacred San Francisco Peaks.


We’ll be showing up in front of the Arizona Department of Environmental Quality (ADEQ) office to stand in solidarity with those arrested, demand that ADEQ change its permission for allowing wastewater to be used on the San Francisco Peaks, and with all indigenous people who hold the Peaks holy.


ADEQ has never held any meaningful public process when it initially decided to allow wastewater to be used for snowmaking. Whose interests are they serving?


One of the protesters who locked themselves to the excavator on Thursday said “Snowbowl plans to spray millions of gallons of waste water snow, which is filled with cancer causing and other harmful contaminants, as well as clear-cut over 30,000 trees. The Peaks are a pristine and beautiful place, a fragile ecosystem, and home to rare and endangered species of plants and animals.”


Another person who locked down said the “action is not isolated, but part of a continued resistance to human rights violations, to colonialism, to corporate greed, and destruction of Mother Earth.”

Posted by Margaret Jean Plews at 7:21 AM