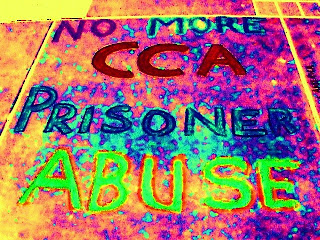 Less than a month after retiring from his post as Director of the Federal Bureau of Prisons (BOP), Harley G. Lappin has been hired to a top positon at the nation's largest private, for-profit prison contractor, Corrections Corporation of America (CCA). In a move that has gone virtually unnoticed by the press except on the business pages, Lappin, who had run the BOP since 2003, has been named CCA's Executive VP and Chief Corrections Officer. According to a company press release, his responsibilities will include "the oversight of facility operations, health services, inmate rehabilitation programs, [and] purchasing."

Lappin announced his retirement in March, a few days before making public his arrest, the previous month, on DUI charges in Maryland. In a memo apologizing to BOP employees, Lappin admitted to a "lapse in my judgment...giving rise to potential embarrassment to the agency," but he refused to acknowledge a direct link between his arrest and his retirement. The announcement of his appointment to a leadership position at CCA came just over three weeks after his effective retirement date of May 7.

Taking advantage of two concurrent 30-year trends--toward mass incarceration and toward privatization of government services--CCA has grown to a $1.6 billion company that operates 66 facilities in 20 states, with approximately 90,000 beds. It has become notorious for its poor treatment of prisoners, and for numerous preventable injuries and deaths in its prisons and immigrant detention centers. About 40 percent of CCA's business comes from the federal government, including Immigration and Customs Enforcement as well as the Bureau of Prisons. As BOP director, Lappin would have overseen government contracts with CCA worth tens of millions of dollars. CCA spends approximately $1 million annually on lobbying on the federal level alone.

A press release from the invaluable Private Corrections Working Group notes that Lappin's quick trip through the government-to-industry revolving door is hardly unique in the Bureau of Prisons' history: "Lappin joins another former BOP director already employed with CCA, J. Michael Quinlan, who was hired by the company in 1993. He retired as director of the BOP in 1992, several months after settling a lawsuit that accused him of sexually harassing a male BOP employee. While settling the suit, Quinlan denied allegations that he made sexual advances to the employee in a hotel room."

In addition, there's the case of the recently appointed head of the U.S. Marshals Service, Stacia Hylton, who until 2010 was the Federal Detention Trustee. In between serving in these two high-ranking government positions, Hylton worked as a consultant for the GEO Group, the nation's second largest private prison contractor. During Hylton's tenure, the Office of the Federal Detention Trustee gave several contracts to GEO; and the U.S. Marshals Service, like ICE and the BOP, houses federal detainees in privately owned prisons, including some run by GEO.

"Federal ethics rules do not prohibit former high-ranking employees such as Lappin and Hylton from working for private companies, even when those companies contract with the same federal agencies where those former officials were employed," the Private Corrections Working Group points out. "An Executive Order issued by President Obama restricts appointees from taking official actions that directly and substantially affect immediate former clients and employers; however, that ethics rule was not applied to Hylton and it has been waived for over two dozen other federal officials, according to a report by the U.S. Office of Government Ethics."

James Ridgeway is a senior correspondent at Mother Jones. For more of his stories, click here. Get James Ridgeway's RSS feed.

Posted by Margaret Jean Plews at 1:44 AM