The guy from Graffiti Busters came by yesterday morning to clean up Resistance Alley for a second time since June Artwalk -it was a busy weekend. Here's the follow-up to that original action - my challenge to the Phoenix Police to take action other than the ones they have to take against me.

Apparently, this is their only response. 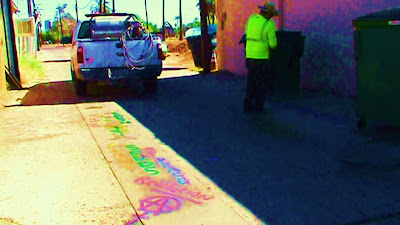 The Graffiti Buster must not have to face the vandals whose art he demolishes very often - when I caught him checking things out and asked if he was planning to clean up my work, he muttered "maybe", then hurridly took off. I think I scared him: he was back less than 30 minutes later with four Phoenix Graffiti Detectives, one of whom finally read me my rights. 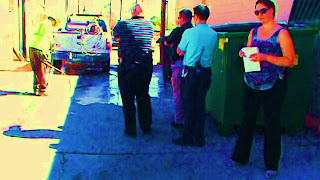 The Graffiti Sgt. (Cadditz, I think) advised me that I can knock all this off now - he wasn't sure if I was facing felony charges yet or just a handful of misdemeanors, but he assured me that complaints about my activity have been referred for prosecution. I guess they've got a stack of evidence (including my blogs and postcards, I'd imagine) on someone's desk in the city attorney's office. 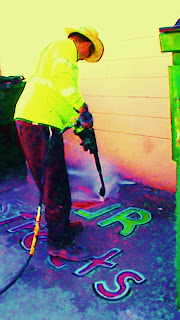 I'm not sure what exactly happened this AM with my rights being read to me - I automatically clammed up, though, which is kind of funny given how much I've already incriminated myself. I wasn't arrested - just warned that I will probably be getting notice of something about my other crimes in the mail. Funny how I still feel privileged - why can't I get arrested?

Maybe I was Mirandized instead of arrested because I'm just a suspect in this new crime they all came to investigate (the art that was being removed right then, that I just confessed to creating). Maybe it's because I've been so cooperative, sending them my postcards from the edge as evidence. But why four cops? I think it was in case I got out of hand over my art being defaced.
Isn't that silly that the Graffiti Buster needed so many cops to protect and defend him - from ME, of all people? Granted, I was pretty upset to see my good work ruined - it wasn't bothering anyone but "The City" down there...of course, that's who I'm trying to annoy.
Unfortunately, while they have plenty troops to deploy against me (and the city's taggers), they don't have a minute to spare of anyone who will even look into all these deaths in the prisons - not even one. I just get told to gather more evidence for them, and they'll think about it.
Seriously, what would it take for the new PHX Police Chief to just pick up the phone and say "Hey, Chuck Ryan - WTF??? How come all your prisoners are dying? We aren't sending any more criminals your way until you clean it up." Simple as that.
Real courage - that's what it would take. There isn't much of that among law enforcement out here in the Deep Southwest these days. They don't want to challenge power here -  they know who pays their way. And really, to do what I do in this place, apparently you must be a little mad.
Resistance sure isn't coming from those most invested in maintaining this whole illusion that our justice system fundamentally works, that prison is a necessary part of it, and that they're all the good guys in this simplistic paradigm (that means those who oppose the state's police apparatus can only be "bad"). In fact, after he read me my rights I asked the Graffiti Sgt. who was going to do something about the prisons. He smiled and shook his head a little, then said " that's on you!"


Great - no help at all. They'll sure show me, for trying harass and guilt trip the city into taking their share of responsibility for the prison crisis with my criminal activity. Not only will they clean up after me within hours of finding my work, they won't lift a finger to stop the rising death toll in the prisons. 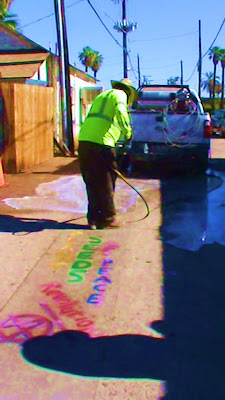 So, I've said it before - fuck the DOJ, the ACLU, and the Phoenix Police if they won't help.
Fuck the Arizona Governor and State Legislature, too.
And if you're reading this and not doing or saying anything
about all these vulnerable people dying inside,
then fuck you, too.
If you want to make a difference, though,
then help me do our own in-depth investigation and report,
and we'll make them change without anyone else's intervention.
We'll be meeting weekly beginning July, probably at the new
Ironwood Infoshop, soon to be in the back of
The Fixx / 11 E. 7th St. / Tempe, AZ 85281
in the meantime to volunteer or donate to our efforts, contact me at:
Peggy Plews
PO Box 20494
Phoenix, Az 85036
prisonabolitionist@gmail.com
480-580-6807
I'm only at my 1009 N. 1st St. office until July 1 - then I'm going to be mobile. 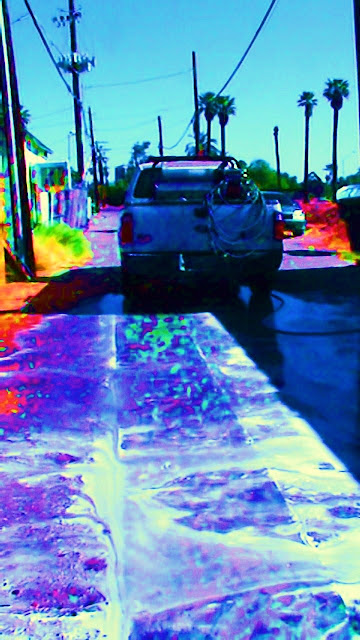 So sad and so lovely...
Posted by Margaret Jean Plews at 8:42 AM