I have been accused of spreading propaganda about the Arizona DOC on more than one occasion by Chuck Ryan, Jan Brewer's most favored perpetrator of punishment (I think Terry Stewart actually has something on her, to tell you the truth - that's the only reason she could possibly still be standing by her man). All I do, though,  is tell folks what prisoners and their families and the DOC staff are telling me - and when hundreds of people are saying the same thing about something they see, I think that has more weight than the witness of the perpetrator who is denying not only responsibility, but the existence of a problem to begin with.  I dont need a huge budget for my blogging - nor have I ever been sued - because all I do is tell the truth. Ryan, on the other hand, has to pay a whole crew to spin his leadership failures for the public as success. That should tell you something.


So should the way the DOC packaged and promoted this story about the books from Mexico last week in all the local and national media they could. Talk about propaganda! If I was a prison director anywhere else in the country I would be pretty pissed off at the Arizona Department of Corrections' claim that their "education programming is among the most robust for corrections departments throughout the United States." What arrogance to suggest that this state is seen as a role model for other DOC's anywhere. In truth, the AZ DOC is INFAMOUS across the country for being the most brutal, abusive place to do time, and one of the most dangerous systems to work in: the heroin traffic, gangs and violence are raging out of control and prisoners are dying all over the place of neglect.


The AZ DOC cares so little about the educational needs or rights of their Spanish-speaking prisoners that they haven't even bothered to translate a single of their policies into Spanish, despite having over 5,000 foreign nationals in their prisons. Spanish-speaking prisoners have to rely on bi-lingual prisoners to translate for them if they are filing a grievance, appealing  a disciplinary action, trying to obtain medical care, or even speaking to a medical professional about their prostate cancer. That means they dont have fair access to the courts, or resources, or anything in prison. AZ DOC makes us all look like hypocrites, living in a true sham of a democracy.

THAT's why the Mexican Government donated textbooks for Arizona's Spanish-speaking prisoners. And if any of those books are for educating their citizens about their legal rights as prisoners, you can bet they'll hit the incinerator before they see a single AZ prison library shelf...unfortunately they all look like children's books. Great.  DOC is going to be teaching adult prisoners how to "See Spot run" instead of how to make sure they get through their incarceration and make it back home alive. God forbid a foreign national should be allowed to read about his own rights in the custody of a hostile captor. 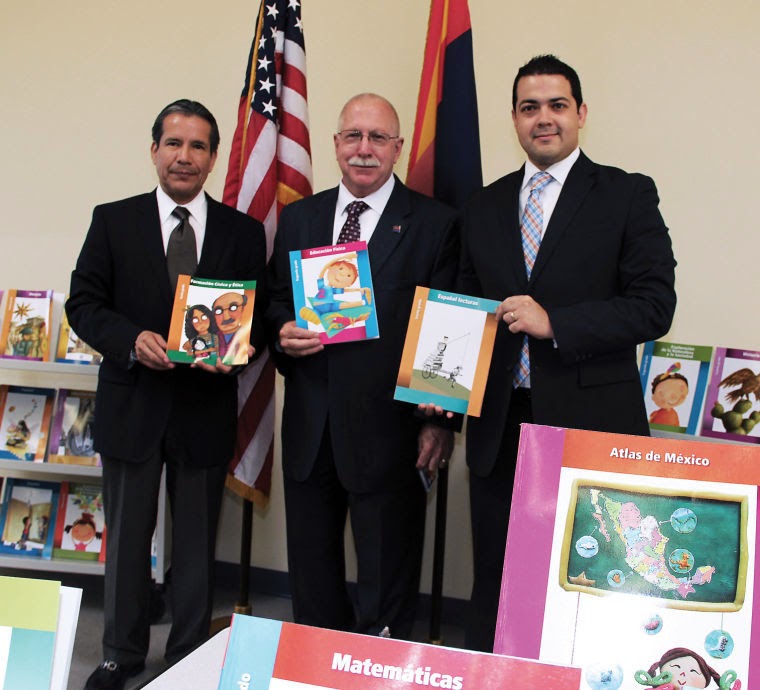 photo from the YUMA SUN, courtesy of AZ DOC

The government of Mexico has graciously donated more than 1,600 Spanish-language textbooks to the Department of Corrections.

These are now being distributed to our prison complexes throughout Arizona, where they will be made available in prison education libraries.

This donation goes beyond generosity. It addresses a fundamental need for this department, because books of this kind are an essential part of helping every inmate get an education.

Our commitment to inmate education is something that some people may not be fully aware of. ADC's education programming is among the most robust for corrections departments throughout the United States.

In a typical month, approximately 6,000 inmates are enrolled in some form of educational program such as functional literacy, career and technical education, special education or high school equivalency.

This is in addition to the tremendous amount of programming we provide to address substance abuse issues, promote self-improvement, and help inmates develop job skills that will help them become productive and law-abiding members of society when they're released. But without an educational foundation, inmates will not be able to make progress toward that goal.

A significant portion of our inmates speak Spanish as their primary or only language, and it's important that they have the resources they need in order to fulfill their responsibility to get an education.

This donation represents the best kind of partnership between two countries because it meets a substantial need and it will get tangible results. Sincerely,