De-criminalize Queerness and HIV: A Roadmap for Change! 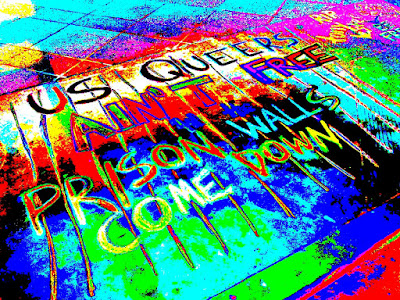 
Over the course of the past 12 months or so, I've had intensive correspondence with a number of gay men and transgender women imprisoned in the AZ Department of Corrections. Of all the stuff I've read on the LGBT community and criminalization, the best stuff seems to come from the prison abolitionists, like Dean Spade. This PDF is worth reading if you're studying or planning to act on issues related to the criminalization of LGBT people and people living with HIV.

the following graphic from American Progress introduces the document well...

Infographic: Why Are So Many LGBT People and People Living with HIV Behind Bars?

The pervasive profiling, arrest, and incarceration of lesbian, gay, bisexual, and transgender, or LGBT, people and people living with HIV, or PLWH—especially those who are people of color—are not simply a response to higher rates of illicit behavior within those communities. The range of unequal laws and policies that dehumanize, victimize, and criminalize people because of their sexual orientation, gender identity, or HIV status perpetuates these high rates of contact with the criminal system. In fact, one study found that a startling 73 percent of LGBT people and PLWH have had run-ins with police in the past five years. 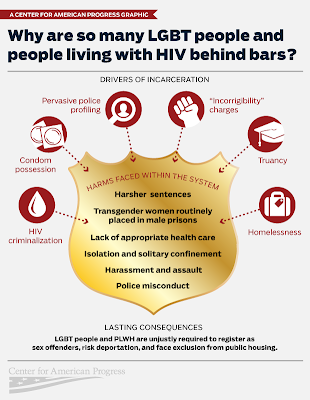 Police, for example, often profile transgender women and use possession of condoms as evidence of prostitution-related offenses and grounds for arrest. Additionally, PLWH in 36 states can be charged with felonies for having consensual sex, biting, and spitting—even when there is no transmission of the virus. And LGBT youth are more likely to be arrested for status offenses—charges that relate to family rejection and hostile school climates, such as running away, sleeping outside, violating curfew laws, and truancy infractions—than criminal activity.

What’s more, LGBT people and PLWH often experience police misconduct such as false arrests and verbal, physical, and sexual abuse while in police custody. They also face harsh sentences, experience a lack of appropriate healthcare, and are sometimes placed in solitary confinement as a safeguard—although this isolation is often more punitive and stigmatizing than protective.

These cycles of criminalization and discriminatory treatment of LGBT people and PLWH often trigger a lifetime of economic and social instability. We can and must dismantle these cycles through federal policy measures that address abusive policing practices, improve conditions for LGBT prisoners and immigrants in detention, decriminalize HIV, and prevent LGBT youth from coming into contact with the system in the first place.

Aisha C. Moodie-Mills is a Senior Fellow and Director of the FIRE Initiative at the Center for American Progress.
Posted by Margaret Jean Plews at 8:53 PM