Special Events 12/30: Insurgent Theater and the Shadow of Lucasville.

As most folks here know, a show I've put together featuring art and letters from state prisoners will be running at the Firehouse Gallery (1015 N. 1st St, PHX) every weekend (F 6-11/S 1-11/ S 1-6) through Sunday, January 5. Best night to come will be during First Friday Artwalk, Jan 3 between 6-8 pm (then come back at 9 for the Firehouse's original "First Friday Night Live" Show too!) 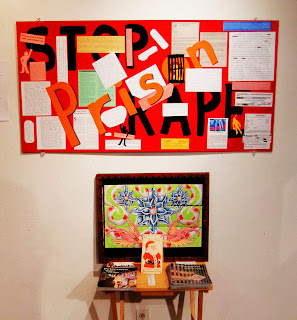 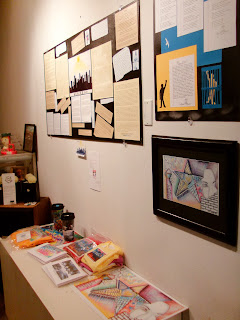 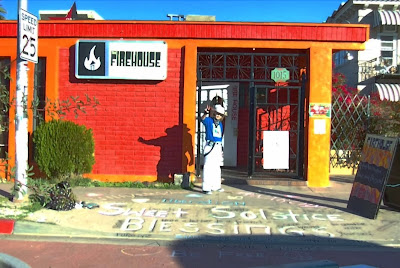 Displays include collages of material from the women's prison, from supermax, and from prison rape survivors, several of whom are transgender women in men's prisons. I also have some individual prisoner art, including some from my good friend and former blogger Shannon Clark, authoer of "Persevering Prison".

I also put together a whole display on a prisoner-initiated and autonomously-run project, the WOMMB Institute, that's helping guys focus on positive personal and community development in an enviroment under seige by prison gangs. It was developed by a lifer in AZ DOC's Winslow prison with whom I've been corresponding for the past year. Here's the blog I started for WOMMB over the summer, which gives you a good sense of what he's all about.

On December 30, the Last Monday of 2013, we'll also be opening the gallery for two special events, back-to-back. If you're bored silly the night before New Year's eve, come out and support us - especially loved ones of prisoners out there. In fact, this would be a great chance to meet others in your shoes - and to meet me, if we only know eachother by Facebook and email so far. Bring something to eat if you plan to hang out all evening - either your own dinner or a dish to pass - or just drop in at any point throughout the night. We'll open at 6pm and probably close up around 10 or 11. 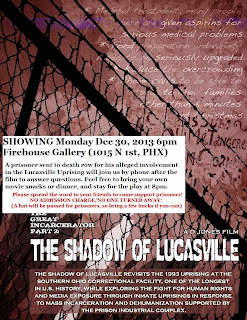 The Shadow of Lucasville revisits the 1993 uprising at the Southern Ohio Correctional Facility, one of the longest in U.S. history, while exploring the fight for human rights and media exposure through inmate uprisings in response to mass incarceration and dehumanization supported by the prison industrial complex.

The film will be followed by conversation with death-sentenced survivors of the uprising, who will be calling in from the Ohio State Penitentiary, Ohio's supermax prison. 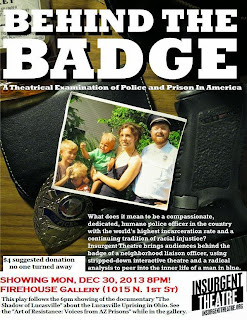 Behind the Badge: A Theatrical Examination of Police and Prison in America.

What does it mean to be a compassionate, dedicated, humane police officer in the country with the world's highest incarceration rate and a continuing tradition of racial injustice? Insurgent Theatre brings audiences behind the badge of a neighborhood liaison officer, using stripped-down interactive theatre and a radical analysis to peer into the inner life of a man in blue.