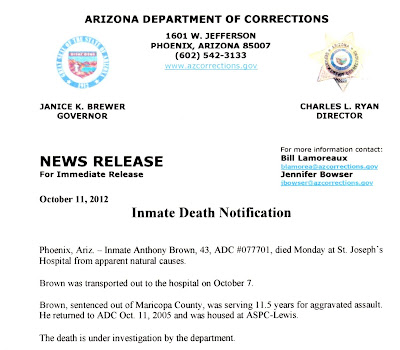 A Phoenix woman claims her husband died after being refused medical treatment at Lewis Prison in Buckeye.

"He was in a good mood, everything was great, you know," she said.

After that conversation, she had trouble reaching him. She visited the prison in Buckeye on Sunday and was unable to find out details of her husband's condition.

She was informed early Monday morning that he had passed away. Since then, she has been able to piece together what may have happened after talking with prison officials and other inmates who were close to her husband.

On the Friday after her last visit, Anthony Brown came down with a severe migraine headache.

She said her husband and other inmates were begging for medical help, but that corrections officers blew them off.

"There were probably 15 to 20 officers and medical staff that had seen him in that condition and not one person did their job. Not one," she said.

They provided CBS 5 the following statement:

"Wexford is awaiting word on the autopsy to determine the next steps and the reason for his (Mr. Brown) passing."

Anthony Brown was serving a 10-year sentence for aggravated assault. He was set to be released next September.