Cowards. Now he's free to run amok again, abusing his power. Why do we really think we can trust the police to police the police, anyway? Join Phoenix COPWATCH instead of signing a stupid petition appealing to Uncle Sam to rescue us this time. And vote the pig out of office, if you can... 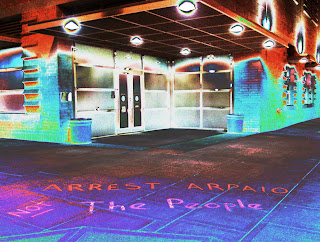 
Feds shut down criminal investigation of Arpaio; no charges to be filed

The U.S. Attorney's Office has closed its long-running abuse-of-power investigation into Maricopa County Sheriff Joe Arpaio -- without any charges to be filed.

The press release issued by the U.S. Attorney's Office Friday

An in-depth look at the self-dubbed 'America's toughest sheriff'


In a 5 p.m. Friday news release, Assistant U.S. Attorney Ann Birmingham Scheel, acting on behalf of the United States Department of Justice, announced her office "is closing its investigation into allegations of criminal conduct" by current and former members of the Maricopa County Sheriff's Office and the Maricopa County Attorney's Office.

Federal prosecutors have advised Maricopa County Attorney Bill Montgomery of the decision.
In a four-page letter to Montgomery, Scheel explained the reasoning for the decision.

Federal prosecutors decided to not prosecute matters tied to alleged misuse of county credit cards by sheriff's officials, alleged misspending of jail-enhancement funds and other matters. The U.S. Attorney's Office had already made public it would not pursue charges on those matters.

"Law enforcement officials are rightfully afforded a wide swath of discretion in deciding how to conduct investigations and prosecutions," she wrote. "Unfortunately, such discretion can act as a double-edged sword: although it empowers fair-minded prosecutors and investigators to discharge their duties effectively, it also affords potential for abuse. Our limited role is to determine whether criminal charges are supportable. After careful review, we do not believe the allegations presented to us are prosecutable as crimes."

Scheel wrote that the agency was mindful that a disciplinary panel had concluded Thomas, Aubuchon, Hendershott and Arpaio conspired in a criminal manner to violate Donahoe's civil rights.

"However, our obligation is different from the State Bar disciplinary panel, under its rules and burdens of proof, has reached certain conclusions about the conduct of Thomas and Aubuchon," she wrote. "We must weigh the evidence and law under the far heavier burden associated with criminal prosecution. Based on this review, we have concluded that allegations of criminal misconduct under federal statutes are not prosecutable."

She wrote it was "not enough to show that Judge Donahoe was subjected to conduct that was abusive or even unconstitutional. While Judge Donahoe suffered severe turmoil resulting from the criminal charges, as evidenced by the record in the Bar proceedings, we don't believe there is sufficient evidence to meet our burden that he suffered the sort of complete job depreciation contemplated by existing precedent."

"I'm just pissed," said Maricopa County Supervisor Andy Kunasek. "If (former Deputy County Attorney) Lisa Aubuchon and (former Sheriff's Chief Deputy) David Hendershott are not prosecuted for perjury, then this is all about politics. This is about a Justice Department that is afraid to do their jobs."

Maricopa County Supervisor Mary Rose Wilcox, one of those who has sued Arpaio alleging she was improperly investigated, said she was shocked when contacted by The Republic.

"I can't imagine why they would do that when there's so much evidence there, particularly from the Thomas case and all the testimony that came out. I just am floored," Wilcox said.

Sheriff's Deputy Chief Jack MacIntyre commended federal prosecutors for their handling of the investigation that began in 2008.

MacIntyre also said the U.S. Attorney's Office recognized that many of the allegations related to the anti-corruption enforcement unit Arpaio started with former County Attorney Andrew Thomas were handled in the State Bar proceeding that resulted in Thomas being stripped of his license.

"The U.S. Attorney's Office and its investigators recognized what Sheriff's Office has said all along: we did not make any prosecutorial decisions, even through things were referred to the then-county attorney," MacIntyre said. "The sheriff and the Sheriff's Office commend the U.S. Attorney's office for having the honesty, the integrity and the strength of character to make the statement that they do today: clearing this office and dispelling the shadow that's been lingering over it for over three years."

Thomas, a onetime Arpaio ally, was disbarred earlier this year. During the disbarment proceedings, testimony was given that Arpaio or his subordinates had abused the power the office.

The investigation began in December 2008.

Bill Solomon, a spokesman for the U.S. Attorney's Office, said he could not comment any further on the agency's decision. He said the agency would not immediately release records pertaining to the closed investigations.
Posted by Margaret Jean Plews at 10:57 PM