Thanks JJ and the AZ Republic for keeping up with this tragic case...and to Marty's family for holding the real bad guys accountable... 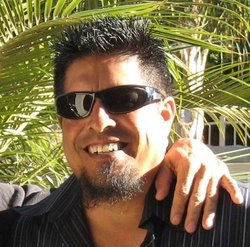 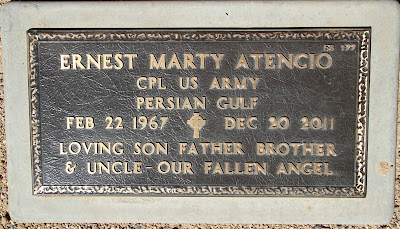 
The family of a man who died in December following an altercation with police and detention officers in a Maricopa County jail has filed a $20 million notice of claim against the city of Phoenix, the Sheriff's Office and the county agency responsible for health care in the jails.

The claim, filed Friday, alleges that excessive force, coupled with a series of failures by medical professionals to tend to Ernest "Marty" Atencio, contributed to the 44-year-old's death in December.

Atencio died four days after he was removed from a "safe cell" in the Fourth Avenue Jail.


The Maricopa County medical examiner last week issued a report that concluded that Atencio died of cardiac arrest, acute psychosis, medical problems and "law-enforcement subdual," but the report did not list a manner of death.

Atencio's family believes that the manner of death was homicide, committed at the hands of sheriff's detention officers in an altercation that began when two Phoenix police officers began to struggle with Atencio after he refused to remove his left shoe. They wanted the shoe removed to be scanned as he prepared to enter the jail.

The Phoenix officers took Atencio to the ground, and surveillance footage shows the detention officers dragging Atencio into a safe cell, where the number of officers in the small cell obscured their actions from the camera.
A safe cell is a room designed to reduce inmates' ability to injure themselves or others.

The claim contends that at least one officer punched Atencio and that another officer shocked Atencio with a stun gun six times, with several of those strikes coming within inches of his heart.

The notice of claim is a necessary precursor to a lawsuit against a public entity. State law requires a claim to list a dollar amount for which it can be settled. Atencio's family set that amount at $5 million for Phoenix police and $15 million for the county agencies.

The Sheriff's Office is continuing to investigate the incident and declined comment.

A pair of Phoenix police officers contacted Atencio twice on the night he was detained.

During the first contact, outside a convenience store, officers noticed that Atencio was acting erratically and told him to go home. Moments later, the officers received a call about a man kicking at a woman's apartment door in the 2800 block of West Laurel Lane. The officers recognized Atencio as the man they had encountered outside the convenience store, and they arrested him after the woman requested prosecution.

When Atencio arrived at the Fourth Avenue Jail's intake area -- where inmates are screened for medical and mental-health concerns and the most serious are supposed to receive immediate attention -- officers recognized his signs of mental illness but failed to respond, according to the claim.

"She (mental-health professional Monica Scarpati) admitted that she did not complete a full assessment of Marty and sent him to an isolation cell," the claim states. "Ms. Scarpati and (Correctional Health Services nurse Bill McClean) fell below the applicable standard of care by, in RN McClean's words, 'accepting' Marty into the jail and not doing anything to make sure that Marty got the immediate medical attention that he so obviously needed and deserved."

According to the claim, as Atencio waited for further processing, other officers noticed his mental state and began mocking him. According to an interview with an inmate who was nearby at the time, one officer thought Atencio's mug shot could be featured on the Sheriff's Office website that posts booking photos.

"An MCSO lieutenant stated in an interview that the process of taking Marty's photo was, 'Ah, you know, it's kinda comical,'" according to the claim.

As Atencio prepared to leave the booking area, he became uncooperative with Phoenix officers but was not violent or combative, according to interviews with officers contained in the claim.

Surveillance video shows that when a Phoenix officer placed his arm around Atencio's neck and took him to the ground, nearby officers joined in the effort to subdue Atencio. His family called the events that followed a "jailers' riot."

The claim does not request any damages from the Medical Examiner's Office, but it does allege that the office attempted to shield the county from liability by failing to name a manner of death from one of the four descriptions: suicide, homicide, natural causes or accidental.

"The medical examiner's report is part science and part defensive doublespeak designed to deflect and limit the county's liability," the claim states. "The notion that Marty's manner of death is 'undetermined' is a farcical sleight of hand by the county. The cardiac arrest was induced by the 'law-enforcement subdual,' so it was obviously a 'homicide,' i.e., caused at the hands of other human beings."
Posted by Margaret Jean Plews at 9:02 AM