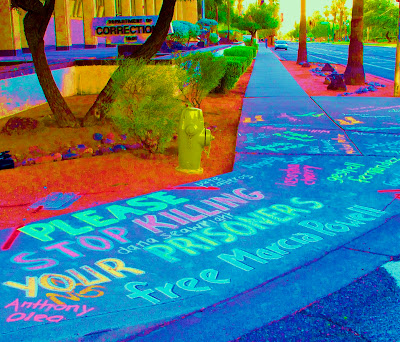 Please, families, tell your loved ones behind bars that help is really on the way. It's going to take a long time for anything to change through the courts, though, so you need to tell prisoners to be patient and "No more suicides!" At least have them write to me before they give up for good...

--------from the National ACLU's website, at long last. Thanks to all the partners taking this state to task for their abuse and neglect of our most vulnerable prisoners-----

PHOENIX – Prisoners in the custody of the Arizona Department of Corrections receive such grossly inadequate medical, mental health and dental care that they are in grave danger of suffering serious and preventable injury, amputation, disfigurement and even death, according to a federal class-action lawsuit filed today by a legal team led by the American Civil Liberties Union and the Prison Law Office.

The lawsuit also charges that thousands of prisoners are routinely subjected to solitary confinement in windowless cells behind solid steel doors, in conditions of extreme social isolation and sensory deprivation, leading to serious physical and psychological harm. Some prisoners in solitary receive no outdoor exercise for months or years on end, and some receive only two meals a day.

“The prison conditions in Arizona are among the worst I’ve ever seen,” said Donald Specter, executive director of the Berkeley, Calif.-based Prison Law Office. “Prisoners have a constitutional right to receive adequate health care, and it is unconscionable for them to be left to suffer and die in the face of neglect and deliberate indifference.”

Specter was the lead counsel in Brown v. Plata, a similar case from California in which the Supreme Court last year reaffirmed that prisoners have a constitutional right to adequate health care.

“Courts have consistently ruled that solitary confinement of people with mental illness is unconstitutional because it aggravates their illness and prevents them from getting proper treatment,” said David Fathi, director of the ACLU National Prison Project. “Even for those with no prior history of mental illness, solitary confinement can inflict extraordinary suffering and lead to catastrophic psychiatric deterioration.”

Critically ill prisoners have begged prison officials for medical treatment, according to the lawsuit, only to be told to “be patient,” that “it’s all in your head,” or that they should “pray” to be cured. Arizona prison officials have repeatedly been warned by their own medical staff of the inadequacy of the care, echoing complaints from prisoner advocates and families that prisoners face a substantial risk of serious harm and death. Yet, they have failed to ensure that minimally adequate health care is provided as required by the Constitution.

In one particularly tragic case, a prisoner at the state prison complex in Tucson died last year of untreated lung cancer that spread to his liver, lymph nodes and other major organs before prison officials even bothered to send him to a hospital. The prisoner, Ferdinand Dix, filed repeated health needs requests and presented numerous symptoms associated with lung cancer. His liver was infested with tumors and swelled to four times its normal size, pressing on other internal organs and impeding his ability to eat. Prison medical staff responded by telling him to drink energy shakes. He died in February 2011, days after finally being sent to a hospital but only after his abdomen was distended to the size of that of a full-term pregnant woman. A photograph of Dix shortly before his death appears in the lawsuit.

Jackie Thomas, one of the lawsuit’s named plaintiffs who is housed in solitary confinement at the state prison complex in Eyman, has suffered significant deterioration in his physical and mental health as a result of being held in isolation, where he has become suicidal and repeatedly harmed himself in other ways. Prison staff have failed to treat his mental illness, improperly starting and stopping psychotropic medications and repeatedly using ineffective medications that carry severe side effects. Last November, Thomas overdosed on medication but did not receive any medical care.

“Faced with such gross indifference on the part of prison officials to the needs of prisoners with mental illness in their care, it was essential we get involved,” said Jennifer Alewelt, staff attorney with the Arizona Center for Disability Law, one of the plaintiffs in the lawsuit. “Prisoners with mental illness can be particularly vulnerable, and we must do everything we can to ensure their mental health needs are met while incarcerated.”

Filed in the U.S. District Court for the District of Arizona against Charles Ryan, director of the Arizona Department of Corrections, and Richard Pratt, the department’s interim director of the division of health services, the lawsuit asks, among other things, that constitutionally adequate health care be made available to prisoners, that medications be distributed to patients in a timely manner, and that prisoners not be held in isolation in conditions of social isolation and sensory deprivation that put them at risk of harm. The lawsuit does not seek monetary damages.

“Arizona has used the absence of transparency to callously ignore the basic needs of persons entrusted to its care, at times with deadly results,” said Daniel Pochoda, legal director of the ACLU of Arizona. “Absent court intervention the health and well-being of thousands of prisoners will continue to be sacrificed to economic expediency.”

According to the U.S. Bureau of Justice Statistics, Arizona has the sixth-highest incarceration rate in the nation.

Other attorneys on the case are Daniel C. Barr of Perkins Coie LLP and Caroline Mitchell of Jones Day.
A copy of the lawsuit is available here and here.
Posted by Margaret Jean Plews at 11:37 AM