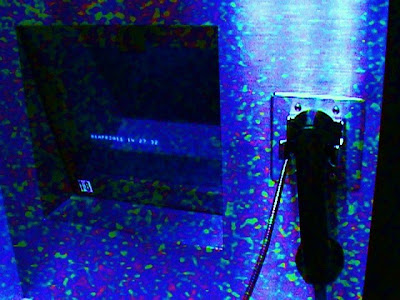 It's the families this really takes the toll on, not the prisoners - except that it means many prisoners will be even more cut off from those who could help them stay out of prison than before. There's an upside to that, though - recidivism (i.e. more crime and victimization) increases profits for CCA, too...

For inmates at one Georgia prison, a one minute phone call could cost them five times more than they earn for a day of work.

The Correction Corporation Of America's Stewart facility, a private prison in Lumpkin, Georgia, is forcing prisoners to pay five dollars per minute to use the phone, Alternet reports (h/t ThinkProgress). The exorbitant rate would break most people's budget, but it's especially costly for inmates that the prison who make just one dollar per day to work at the facility.

Faced with huge budget shortfalls, states are increasingly relying on privatized prisons to house criminals in their state and the for-profit corporations behind those prisons are coming up with various ways to maximize revenue. The money the Stewart prison is collecting from its 2,000 prisoners to use the phone helped the prison net profits of $35 to $50 million a year, ThinkProgress reports.

Compared to the total earnings of CCA that sum may seem small, however. Last year, the private prison company raked in $1.7 billion in revenues, according to FOX Business. GEO Group, another for-profit prison corporation headquartered in Boca Raton, Florida, saw $1.3 billion in revenues in 2010.

The telephone rates are just one way private prisons are maximizing revenues. To help keep their facilities stocked with inmates, the private prison industry helped to draft Arizona's tough immigration law and lobbied aggressively to get it passed, NPR reports. Indeed, while they make up only 10 percent of prisoners nationwide, according to a separate NPR report, the number of prisoners in private prisons has increased 1,600 percent from 1990 to 2009, the American Civil Liberties Union reports.

An even more controversial private prison source of income is the what federal prosecutors are calling "Kids for Cash," -- owners of private juvenile detention giving kickbacks to judges to sentence minors for benign offenses in an effort to boost revenue -- FOX Business reports. In Pennsylvania, two judges were recently sentenced to over 40 years in prison combined for accepting kickbacks from the owner of a juvenile detention center.

The judges sentenced minors for offenses that included a 10-year-old girl accidentally lighting her room on fire and a 13-year-old boy throwing food at his mother's boyfriend, according to Fox Business.