The SF Bay View does excellent coverage of both California's and the nation's issues related to political prisoners, conditions of confinement, mass incarceration, racial profiling, police brutality, etc., and will be following the Lucasville hunger strikers at the OSP - go straight there for your news. They often publish letters from prisoners across the country as well, so if you know any prisoners with something to say about the conditions of confinement where they are, turn them on to the SF Bay View.

Spacebookers, please hit the strikers' solidarity site and join. These guys still have a hard road ahead.

Also, a reminder that it ain't over yet in Georgia, either. The Black Agenda Report has been providing the best coverage of issues there, and is overall a great publication coming from the Black Left.

Finally, for those of you interested in supporting Arizona's prisoners and challenging the conditions of confinement here, contact me (see side column) or drop into the Conspire Art Collective at 901 N. 5th St, Phoenix (NE corner of 5th. St & Garfield) for a prisoner support group on Thursdays at 5:00pm. Look for me in red high tops and a cowboy hat. My cell is 480-580-6807 if you can't find me or just want to know more. The weekly meeting of the Phoenix Anarchist Coalition follows at 7:30pm.

A great rally, a great victory for the Lucasville hunger strikers

Jan. 15, 4:33 p.m. – I have a short report on today’s rally at the Ohio State Penitentiary in support of the three men on hunger strike. But first, I can now report to you the wonderful news that all three have resumed eating because they achieved a victory. The prison authorities have provided, in writing, a set of conditions that virtually meets the demands set out by Bomani Shakur in his letter to Warden Bobby, provided below. 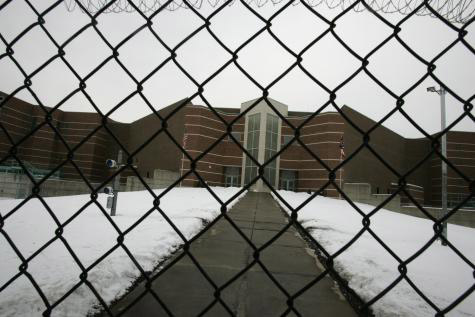 The hunger strikers send you all thanks for your support and state that they couldn’t have won their demands without support from people from around the world. But they add to their statement the following: This time they were fighting about their conditions of confinement, but now they begin the fight for their lives.

They were wrongfully convicted of complicity in 1993 murders in Lucasville prison and have faced retribution because they refused to provide snitch testimony against others who actually committed those murders. Now, because of Ohio’s – and other states’ – application of the death penalty, they still face execution at a future date. Ohio is today exceeded only by Texas in its enthusiasm for applying the death penalty. We need to take some of this energy that was created around the hunger strike to help these men fight for their lives.

So, we may celebrate a great victory for now. Common sense has prevailed in a dark place where there appeared to be no light. But watch this space [2]for further news on their ongoing campaign.

I hope to share a copy of the Ohio prison authorities’ written statement that ended this hunger strike in a short time.

As Bomani has told me many times, “It ain’t over …”

Jan. 15, 4:40 p.m. – The rally at OSP was attended by a large crowd, including many members of the families of the hunger strikers, despite the freezing weather. Family members met with the hunger strikers this morning and they reported that they were in high spirits on ending their hunger strike and winning their demands, but that they now had to turn their attention to their death sentences.

Statements of support came from all over the world and a small delegation of relatives, along with Alice Lynd, went to the prison and left a copy of our open letter for Warden David Bobby [3], signed by more than 1,200 people including prominent people from Ohio and around the world. Warden Bobby was not there, but a designated representative received the letter on his behalf with a promise that he would read it.

The crowd then proceeded to a church hall in downtown Youngstown for refreshments and some celebration over the good news. The organizers, especially Sharon Danann and Alice and Staughton Lynd, want to thank everyone who supported these men for their contribution to this victory.

Our thoughts are with Bomani, Hasan, Jason and Namir, and we will remain at their sides.

Denis O’Hearn is professor of sociology at Binghamton University SUNY. His book, “Nothing But an Unfinished Song,” is a biography of the Irish hunger striker Bobby Sands. This story first appeared on the Facebook page “In Solidarity with the Lucasville Uprising Prisoners on Hunger Strike [2].” Contact Denis O’Hearn through Facebook, at http://www.facebook.com/profile.php?id=1533483976&v=wall [4].

Jan. 3 – I’m writing to inform you that I am henceforth on a hunger strike. After 12 years of what can only be described as a double penalty, I am respectfully requesting that you cease this tortuous predicament that I am in. As a death-sentenced prisoner, I should be allowed the very same privileges as other similarly sentenced prisoners, and this is all I am asking, nothing more or less. Therefore, in spite of what your personal feelings are, I hereby appeal to your sense of professionalism and ask that you seriously consider the following demands:

These things are presently being offered to all death-sentenced prisoners and, again, I hereby respectfully request that I be granted the same. As you know, my appeals are fast approaching resolution, moving me closer and closer to a day of reckoning. Please allow me the opportunity to pursue whatever my end will be with the same level of dignity and respect that other similarly situated prisoners enjoy. You have this within your power to permit, and I ask that instead of abusing your power that you use it justly, and soon.

Posted by Margaret Jean Plews at 9:32 AM