Leave No Veteran Behind: US Veterans in Prison, 2010.

The word on vets in prison is that a lot of them are dying these days. 65% of veterans in prison are over 55 years old. A good many of them are Vietnam War vets dying from the complications of Hepatitis C. Yeah, being a Vietnam era vet is a risk factor for the disease, though it's likely due to the high incidence of IV drug use in particular among vets of that generation.

Interestingly, there doesn't appear to be a higher incidence of drug use among vets in prison than the rest of the prison population. That may not be saying much, though. Most people in prison are there for drug-related convictions.

The news on what our vets are in prison for is not good. Most are in for violent or sexual offenses. It's possible that veterans with lesser offenses are just being cut more slack in sentencing, concentrating the violent offenders among them in prison. The verdict on how PTSD affects this population is still out, but there's a clear correlation between military service and violent crime.

The US DOJ is overdue for a new statistical report and analysis. We've had over nine years of war, with soldiers going out on multiple deployments, since the last big study they put out in 2000. There's a particular need for an examination of women veterans in prison. Here's the 2007 press release on the DOJ's updated figures, nonetheless. Keep in mind it was from statistics gathered in 2004.

Here's the link to the UK's Howard League recent study on veterans in US prisons. It's also very informative. We really should be studying this more ourselves, though. 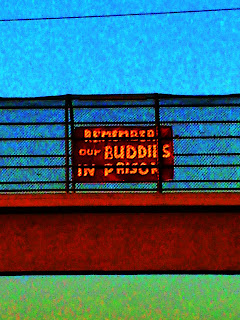 Veterans Older, Better Educated Than Other State and Federal Prisoners

In 2004, the percentage of state prisoners who reported prior service in the U.S. Armed Forces (10 percent) was half of the level reported in 1986 (20 percent). BJS began surveying federal prisoners in 1991, and federal inmates showed a similar decline in reporting military service – from 20 percent in 1991 to 10 percent in 2004.

Despite the declining percentages of prisoners with prior military service, the estimated number of veterans in state and federal prison increased by more than 50,000 between 1985 and 2000. This increase coincided with a rapid growth in total prison populations. Since 2000, the number of veterans in prison has fallen 13,100 or 9 percent.

Veterans were less likely to report drug use in the month before their offense (42 percent) than other state prisoners (58 percent). Veteran status was not related to inmate reports of alcohol dependence and abuse.

The report, Veterans in State and Federal Prison, 2004 (NCJ-217199), was written by BJS statistician Margaret E. Noonan and BJS policy analyst Christopher J. Mumola. Following publication it can be found at http://bjs.ojp.usdoj.gov/index.cfm?ty=pbdetail&iid=808.

For additional information about the Bureau of Justice Statistics please visit the BJS Web site at http://bjs.ojp.usdoj.gov/.

The Office of Justice Programs (OJP), headed by Assistant Attorney General Regina B. Schofield, provides federal leadership in developing the nation’s capacity to prevent and control crime, administer justice and assist victims. OJP has five component bureaus: the Bureau of Justice Assistance; the Bureau of Justice Statistics; the National Institute of Justice; the Office of Juvenile Justice and Delinquency Prevention; and the Office for Victims of Crime. Additionally, OJP has two program offices: the Community Capacity Development Office, which incorporates the Weed and Seed strategy and OJP’s American Indian and Alaska Native Affairs Desk and the Sex Offender Sentencing, Monitoring, Apprehending, Registering and Tracking (SMART) Office. More information can be found at http://www.ojp.usdoj.gov.
Posted by Margaret Jean Plews at 8:54 AM