Ever since learning about William Macumber, I've been wondering what else I can do to help. The Change.org petition seems to be going pretty well. I also made some postcards to send the Governor and the media (and to Bill) for his birthday (AUG 31 he'll be 75). Feel free to download, or get creative and make some of your own - you can still send them out after his birthday; I just thought the timing was good. Here's the photo and text I used: 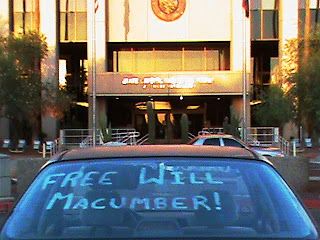 William Macumber will be 75 on August 31. He is an innocent man, whose fate is in your hands. Please free him from prison and send him home to his family. It’s the right thing to do.


I also found the the Freedom for Bill Macumber website - you folks really need to go there and read more on his case. There are a couple of different petitions there, one being for sentencing reform for Old Code Lifers. Check it out, sign their petitions, and send your "Free Bill Macumber" postcards and letters to the Governor, Rep. Cecil Ash (Chair of the House Study Committee on Sentencing); members of the AZ House and Senate Judiciary Committees, and your own legislators in Bill's support. Changing the Old Code Lifers law seems to be Bill's only shot at getting free, unless the Governor can be convinced to change her mind. The Arizona Justice Project that helped Bill get through the clemency process seems to be behind that.

Actually, I'd like to see some new legislation that requires the state to free people from prison in prison who the Board of Executive Clemency finds to be innocent. We also need to prohibit the courts from refusing to hear new evidence where there remains a claim of innocence, as in Courtney Bisbee's case. It's incomprehensible that either Bill or Courtney are still in prison, and that there isn't a huge public uproar over it. The lives of too many wrongfully convicted people hinge on politics, not justice, when it's up to a governor or the trial judge whether or not to take a second look at a conviction.

Here's a bit on the Old Code Lifers law (from http://freedom4bill.com):

What Else Can I Do?

As of March, 2010, Bill Macumber is still in prison in Douglas, Arizona. His son Ron and family traveled to Arizona in February to preview the documentary film and visit Bill in the Douglas Prison facility. Bill remains upbeat although he is very disappointed that the petition for clemency was vetoed by the Governor.

Bill’s life sentence is considered to be defined by the “old code” (the 1956 Criminal Code). Because of this, he is not eligible for parole. In 1973, the Arizona State Legislature rewrote Arizona’s death penalty statutes, adding a minimum sentence a period of 25 years. However, in doing so, they left a group of prisoners (now 29) ineligible for parole, with only “natural life” as their guideline for time served. Each of these 29 “old code lifers” has served over 32 years, and all are over the age of 55 (the average age is 65).

Many life-sentenced inmates since that time have served at least the minimum, then applied for and received parole. In one of his case’s many heartbreaking circumstances, Bill Macumber has never been allowed this privilege. He is effectively sentenced to life without parole, even though “life without parole” was not a sentence in Arizona at that time.

A proposition is currently being drafted for the Arizona legislature which would allow these 29 “old code lifers” to be eligible for parole. It does not guarantee parole, yet provides an opportunity for those who are trapped in the situation created by the 1973 amendment.

You can help support this bill by adding your name to the petition below and reading more at www.oldcodelifer.com. You are encouraged to email or write to your legislator and let them know that you strongly support a reform proposition which would allow Bill Macumber to apply for parole.

Posted by Margaret Jean Plews at 9:59 AM