This is my friend, Davon.

This is a recent letter from my friend, Davon Acklin. He doesn't mention the campaign going on for him out here, but I know he's worried about the other guys there who are sicker than him; as Julie said at one point, this is about them, too.
We need to push on the clemency process so people don't have to die in prison who weren't sentenced to do so. We need more transparency and public dialogue about the treatment of hepatitis C in both the community and our human warehouses (prisons, schools, shelters, hospitals...). We need to make sure that health care is adequate in the prisons. And we need to bring home the sick and dying. 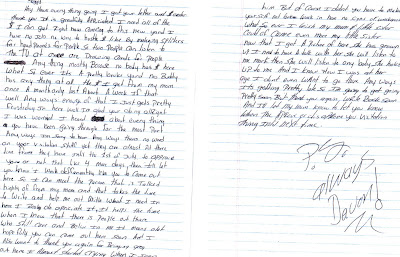 Anyway, this is the good soul I know Davon to be, describing the daily challenges of getting by in prison, worrying about how I was doing in the wake of a recent assault, and talking about having to always look tough in there to keep himself safe. He talks about his sister growing up, and what a terror he was at her age, and how he needs to be a good influence on his little sister, who looks up to him.

Here's a picture of Davon looking tough in his prison orange. He does a good job of it when he has to, but he's a real sweetie. That's why I'm posting this letter, which you can barely make out but you should get the gist of - he was worried about how I'd been getting along, and really touched that I brought his dad, Greg, down for a visit. He can't wait to see his sister and Mom, Not a mention of being sick; I think in a way he's a little uncomfortable with all this attention.
Despite his discomfort with being a poster child for prisoners with Hep C, Davon gave us his blessings to use our own discretion in all this organizing and activism around him because he thinks that by advocating for him his mom will end up helping the other guys he sees there. That's precisely what she's hoping to do.

Given the stigma associated with infectious diseases like HIV and Hepatitis (not to mention a psychiatric disability and a record as a violent criminal) I think that's a pretty courageous position for a young prisoner to take. Davon will be forever Googled back to these pages, with his mom and her friends laying out this crisis in his life for the world to see and judge - something he's willing to risk if doing so will help others.

Now, does that sound like a dangerous criminal? We call that 'lifting as we climb'. That's how we make sure we don't leave anyone behind in this revolution...

The ADC can cause Davon all sorts of grief if they want to, of course, but I don't think they'll stoop to that - it isn't necessary or productive, and it'll just set Julie off on them again. She's trying to focus on building membership in his facebook cause and getting his petition signed for the AZ Board of Executive Clemency right now, and if she's successful then she'll be out of the ADC's hair soon enough. It would be in their best interests to make every effort to help her succeed, not get in her way.

So, hit those links up there for us, and join and sign and spread the word. It's important to show that Davon has a community to come home to that will embrace him and help him keep both his liberty and his sanity. That community is global, now - Davon has friends he hasn't met yet as far away as the Netherlands. His community of correspondents are especially important for the Clemency Board to get personal letters from (in addition to signing the petition), no matter where you may be in the world.

Thanks for your time.

- Peggy Plews
Posted by Prison Abolitionist at 8:16 AM