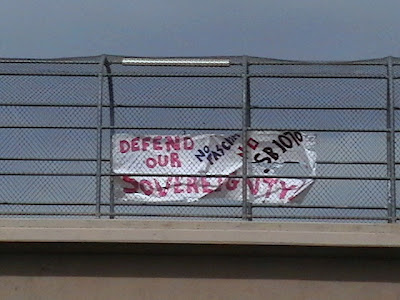 Hey Folks - Note the new widget to the right and click on the Police State to take action against SB 1070. It'll take you to a page to email the Governor. You can use the canned letter they provide, or write your own. Even though she's received over 6,000 emails from the site, I wrote my own:

"We were kind of hoping you would save us from the fascists, not collude with them, but rumor has it that you'll be signing SB 1070 any day now - or just letting it pass into law - not vetoing it.
You still have time to save the day – you can still be the hero of this civil rights movement. Or, you can pave the way for people like Pearce to have even more power over people like you and I.
This will be your great test, I guess – do you have what it takes to fend off the bad guys in the legislature, or do we need a new chief executive?
I don’t believe you would sign this bill if Pearce didn’t have some kind of leverage with you that we can’t see, because I think you know the harm it will do us all. It’s going to tear this place apart.
Remember 's Freedom Summer? may have a similar boost in tourism soon - possibly of people not carrying documents. What a mess that could be, all those civil rights activists getting stopped and detained because they're passing through Arizona looking too brown...how embarrassing, and what a waste of law enforcement resources, verifying that they’re all citizens…
And no doubt hate crimes against Latinos and their sympathizers are about to go out of sight. The bad guys here carry guns everywhere, you know. Most poor people don't.
So, many prayers are with you tonight, as are the hopes of young citizens with undocumented parents, communities with undocumented neighbors, and a whole lot of undocumented and silenced victims of crime who will never feel safe anywhere again...
Would you tell the young woman from who is raped that she should have known better, and deport her in cuffs? Or the Guatemalan teenager looking for his parents that it's their own fault if they're lost in the federal detention system (earning big bucks for CCA every day they stay "lost" there) - then lock him up, too, until they're "found"?
That's the kind of stuff you do, Governor, every time you sign off on one of these abusive pieces of legislation that Pearce pushes through. It's all only gotten worse for people of color in this state under you. If you really believe, with all your heart, that this bill is good for - sign away. By all means, be true to yourself and honest with us about the implications.
But I don't think you really believe it will be good for . I think you know there's a fascist or two among us with far too much power, and that this piece of legislation comes not from a love of , but from a fear of everyone brown - citizen and non-citizen alike. It's about white supremacy. If you sign it, you can't later claim ignorance or innocence - you've been advised by the very people who would know what evil this is.
We’re saddened to think you'll be signing SB 1070, Governor. Just don't think it will win you any votes from the far right - and be sure it will lose you many from the center - once this thing sinks in.
This bill makes us the most racist, fascist state in the country, and we will resist it until the young and the wise and the poor are powerful enough to throw you all out of our State House and Governor’s Mansion..."
Posted by Prison Abolitionist at 12:27 AM