The "execution" of Lino Flores, ASPC-EYMAN: Even supermax isn't "safe".


Another homicide at the AZ DOC, this time in the Supermax prison, ASPC-Eyman. Interestingly, according to the records below, both prisoners were both moved to their current location at Eyman on the same date, perhaps together. Also of note - the victim was Native American, while the killer is identified as Mexican American. That means this crime was intensely personal and spur-of-the-moment, or Salazar had the permission of - perhaps was under the orders of - one of the gangs to take Flores out; otherwise this might start a race war.

How either of these two men were considered to be lower than MAX custody is a puzzle, since they had both apparently killed someone in custody before. Wow, in fact, this was Flores' case. More startling, here is one of the reports about Salazar's history: it says he actually stabbed an officer in the head in 2007 - and that was apparently before he killed someone else. And he was only close custody? Yet they bury political prisoners and the mentally ill guys who have harmed no one in solitary for years...).


I don't know why the DOC didn't have Flores in Protective Custody - he was a target, with that sex crime conviction on his record; it looks like he murdered his rape victim. I'd really call this one a state-assisted execution, not a "murder".

Unfortunately, this man's death is not just "one less bad guy off the taxpayers back" (a comment left at the end of this AZCENTRAL.COM article below by one reader). Yet another homicide in the AZ DOC is symptomatic of the huge problem of violent gangs and thugs running the AZ Prison system under Department of Corrections director Charles Ryan (Jan Brewer's chief disciplinarian); even minor drug offenders are vulnerable to being murdered over petty debts. This victim was probably asking for some kind of protection and denied it before he was killed, and the killer was likely given no choice but to do the deed or be killed himself. That's the way it works in the AZ DOC, under the Mexican Mafia's rule. Better take a closer look at the recent suicides, too - they have a habit of strangling guys and leaving them hanging in the showers.

Due to the high rate of violence, medical neglect, and outright abuse of prisoners in the past 6 years, the AZ DOC has come to be known as the most poorly-run prison system in the country; officers and prisoners alike aren't safe in any of the state prisons, not even in Protective Custody ( where the last two homicides occurred).

So before we celebrate this man's murder - be it because of the seriousness of his own crimes or whatever other reason one may think it represents "justice" -  think about how many lives and tax dollars are being wasted warehousing potheads with murderers in the kind of hellhole where they are more likely to develop a new heroin habit than get any kind of substance abuse treatment. We should all really be asking Jan why she still stands by her man there... 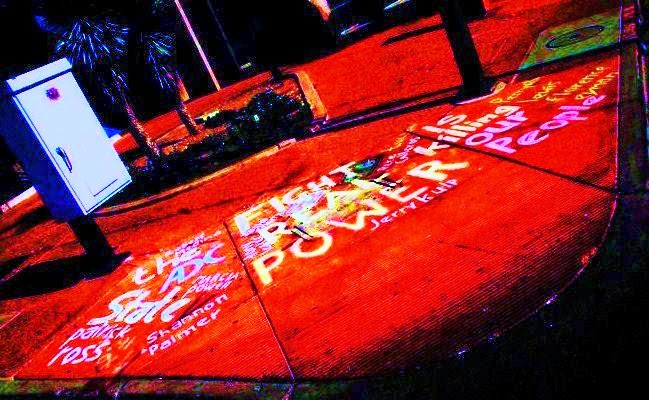 the day the nazis came to town
(phoenix, november 2010)

Matthew Casey, The Republic | azcentral.com
2:51 p.m. MST August 17, 2014
Authorities are investigating a suspected homicide at a state prison in Florence, according to the Arizona Department of Corrections.

No other information was immediately available.
Posted by Margaret Jean Plews at 8:02 AM