How brazen that he thought nothing of trying to give away all that money to those people - that's how little he thinks of his constituents, that he can give our money away to prison profiteers like that while kids are going without in this state. If the people of Fountain Hills had any integrity or sincere concern for the rest of Arizona, they would recall this man for corruption. Meanwhile, he needs to be removed from chairing the House Appropriations committee immediately. 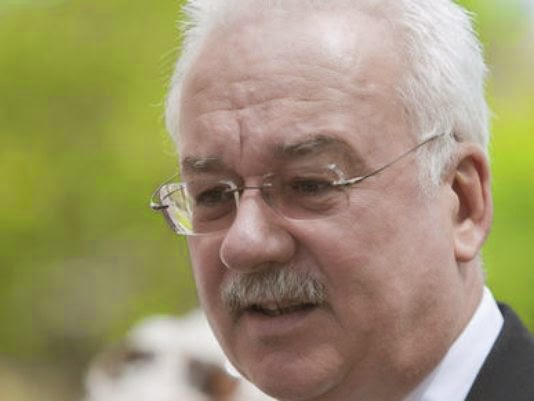 Nearly $1 million in additional funding for private prisons was removed from the state budget today, following an uproar of criticism from Arizonans.

The Senate Appropriations Committee took out $900,000 in excess funds the House last week had earmarked for GEO Group Inc., which is expected to receive $45 million this fiscal year for providing minimum- and medium-security beds in Phoenix and Florence.

The company has contracts with the state that guarantees at least a 95 percent occupancy rate, virtually ensuring the company a profit for operating its prisons in Arizona.

House Appropriations Chairman John Kavanagh, R-Fountain Hills, who has received campaign contributions from GEO executives, sought the increase that was approved by the House.

Kavanagh said Monday that GEO had done the state a "big favor" by providing emergency private-prison beds at a discount rate during the Great Recession, and the company wanted to be financially restored.
"I didn't see a problem in giving them a small increase," Kavanagh said. "If you don't treat people fairly they won't treat you fairly in the future."

Kavanagh said he did not know if he would try to restore the funding taken out of the budget on Monday.
GEO's lobbying firm, Pivotal Policy Consulting, approached Kavanagh directly about getting additional funds even though the company had agreed to contracts with the Arizona Department of Corrections, which did not seek any more money for GEO.

Kavanagh said Monday that Kristen Boilini was the lobbyist who sought the additional money. Boilini did not return telephone calls seeking comment.

Kavanagh said it is common for individuals who share the same political ideology as candidates to contribute to their campaigns, and that he receives contributions from numerous people.

GEO is based in Boca Raton, Fla. The company posted $115 million in profits on $1.52 billion in revenue in 2013. The company, traded on the New York Stock Exchange, paid Zoley $4.62 million in total compensation last year.
Posted by Margaret Jean Plews at 1:34 PM