Shame on the Arizona Legislature for diverting our tax dollars to the pockets of profiteers who are making a killing by providing inferior care to those in state custody. Who's going to pay for the medical care as well as the the grave suffering and deaths of Corizon's victims? WE ARE!!! Our legislators need to take the profit factor out of incarceration in this state and start serving the people, not the corporate elite.

If you have a loved one in the AZ DOC who is diabetic, please contact the American Diabetes Association about Corizon's disastrous mismanagement of diabetes in Arizona's prisons and ask them to send the prisoner an advocacy packet and request for assistance forms. The place to write is:

Also have the prisoner write to me (Peggy Plews PO Box 20494 PHX 85036). Before the news about the latest infectious disease exposure, here are a couple other posts about accessing health care in the AZ DOC :


Corizon and the AZ DOC: Prisoners & Families, Know Your Rights. 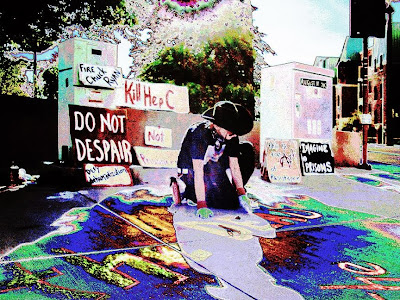 Official: Nurse exposed 24 Buckeye inmates to hepatitis B and C


By Craig Harris The Republic | azcentral.com
Wed Jan 8, 2014 9:40 PM
For the second time in 17 months, inmates at the State Prison Complex-Lewis near Buckeye have been exposed to a life-threatening disease by a private health-care provider.

The latest exposure involved improper procedures by an employee of a contractor that was brought in to replace the previous company after a similar incident.

A nurse working for Corizon Inc., the private health-care provider, improperly injected and exposed inmates to hepatitis B and C, said Clarisse Tsang, the Department of Health Services hepatitis-prevention coordinator. The nurse’s identity was not revealed.

Tsang’s disclosure to The Arizona Republic came after Corizon, which last year was awarded a three-year, $372 million contract to provide state inmate health care, refused to provide details of the incident, which occurred Sunday night.

Some of those inmates were housed in close custody, meaning they represent a high risk to the public and staff because they have been sentenced for violent crimes, according to the Department of Corrections. Other prisoners were housed in minimum custody for low-risk inmates.

In a telephone interview Wednesday, Corizon spokeswoman Susan Morgenstern would not say if inmates were exposed to hepatitis or HIV. She also would not say why the company waited three days to notify the public. She said the company should have additional details to release today.

The Department of Corrections, which awarded the contract, also would not provide details about the potential public health risk despite knowing about the problem since Monday.

Doug Nick, a Corrections spokesman, referred questions to Corizon, saying it was the company’s responsibility to alert the public.

“It’s a medical issue,” Nick said. “They are the doctors and nurses.”

Tsang said the inmates were exposed because of an “improper use of an insulin injection from a vial” on a number of inmates.

Tsang said that up to 10 of those inmates had been exposed to hepatitis in August 2012 when a similar problem occurred with a different private health-care provider whose nurse contaminated the prison’s insulin supply.

Laura Oxley, a Department of Health Services spokeswoman, said her agency is perplexed about how the same problem could have occurred again at the same prison to some of the same inmates.

“It didn’t go without notice,” said Oxley, whose agency is investigating the incident.

The inmates could become extremely ill. Symptoms of hepatitis B and C include nausea, fatigue and yellowing of the skin or eyes. Hepatitis also causes liver problems and can be deadly, Tsang said.
Tsang said it could take up to six months to develop symptoms, though some could occur in two to six weeks.

Corizon said company officials on Tuesday met with the 24 inmates who may have been affected to counsel them and offer the “appropriate preventative medications as a precautionary measure.”

The company, in its news release, said it was developing a corrective-action plan.

Caroline Isaacs, an activist and outspoken critic of privatizing prison health care, said she was “sadly not surprised” that inmates again were potentially exposed to hepatitis.

“It’s just yet another piece of evidence that these kinds of problems are inevitable because they are inherent in the way these corporations do business,” said Isaacs, American Friends Service Committee program director. “This will keep happening until the state of Arizona takes responsibility for medical care in its own facilities.”

Isaacs said she was astounded that the Department of Corrections didn’t inform the public about a possible hepatitis outbreak.

“Who is calling the shots?” Isaacs said. “Arizona ultimately is responsible for what this corporation does or does not do.”

Corizon, in its news release, said it notified the Department of Corrections and Health Services about the problem on Monday.

The company, at the bottom of its news release, also included a statement from Corrections Director Charles Ryan that said: “Corizon responded to this incident immediately and has assured the department that it will conduct a full investigation of this matter to ensure any potentially affected inmates are treated.”

The Department of Corrections, which routinely issues news releases on state letterhead, did not independently disclose information about the incident.

That decision came amid accusations that Wexford improperly dispensed medicine to inmates, wasted state resources and didn’t show a sense of urgency after the hepatitis scare.

Wexford has said its contract performance was hindered by state monitors and a lack of cooperation from Corrections.

To replace Wexford, the state agreed to a more expensive contract with Corizon of Brentwood, Tenn., to become the health-care provider at all Arizona-run prisons. Corizon, the country’s largest provider of correctional medical care, took over March 4. The three-year deal with Corizon cost taxpayers at least $372million, but Corizon has the option to seek additional funds in the final year. That contract is at least 6percent higher than Wexford's $349 million, three-year deal.